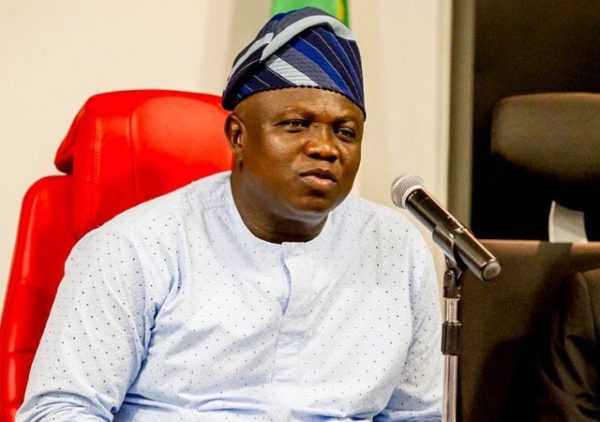 An Ikeja, Lagos State High Court on Wednesday fixed November 20 to hear the suit filed by former Governor Akinwunmi Ambode of Lagos State against his being probed by the State House of Assembly over the purchase of 820 buses in the Bus Reform Project of his administration.
The News Agency of Nigeria reports that Ambode had instituted the civil suit against the State Assembly; its Speaker, Mudashiru Obasa; and the House Clerk, A.A. Sanni.
Other respondents in the suit are Fatai Mojeed, the Chairman of the ad-hoc Committee set up by the House to probe the procurement of the buses, and the other eight members of the Committee.
The eight ad-hoc committee members were Gbolahan Yishawu, A.A. Yusuf, Yinka Ogundimu, Mojisola Meranda, M.L. Makinde, Kehinde Joseph, Temitope Adewale and Olanrewaju Afinni.
On October 29, following a Motion ex-parte moved by Ambode’s counsel, Tayo Oyetibo (SAN), Justice Yetunde Adesanya ordered that the lawmakers appear before the court on October 30 in connection with the ongoing probe.
NAN reports that during Wednesday’s proceedings, the lawmakers were absent in court.
They were however all represented by a counsel, Adenike Oshinowo.
Oyetibo informed the court that all the respondents had been served with the court processes the previous day.
He said: “Your lordship directed that we serve the respondents with the Application of Notice, which has been done.
“We are ready for the Application of Notice filed on October 28 and all the originating processes have been served.”
Responding, Oshinowo informed the court that the lawmakers will be opposing the Motion and that the respondents were served the court documents very late the previous day.
She said: “We were served the Motion on Notice very late yesterday my lord and we shall be opposing the Motion.
“We shall be asking the court for a date to regularise our processes.”
Following the submissions of counsel, Justice Adesanya, while adjourning the case, ordered parties to maintain the status quo.
“This case is adjourned to November 20 at the instance of both counsel for hearing,” the judge ruled.
NAN reports that Ambode is seeking a court injunction restraining the lawmakers to compel him to appear before them pursuant to a resolution passed by the House of Assembly on August 27 as well as any other resolution passed in respect of the buses probe .
The former governor also sought another injunction restraining the respondents from representing or continuing to represent to the public that he procured 820 buses in breach of budgetary approval.
The claimant wants a court declaration that the powers of the State Assembly under Sections 103, 128 and 129 of the 1999 Constitution as amended did not include power to indict him as contemplated by Sections 66(1)(h), 137(1)i and 182(1)i of the Constitution.
Ambode also seeks a court Declaration that the provisions of Sections 1, 2, 3, 4, 8 and 9 of the Appropriation Law of Lagos State 2018 requiring the approval of the House of Assembly before certain expenditure of money is incurred by the executive branch of the state is not in accordance with Constitutional provisions.