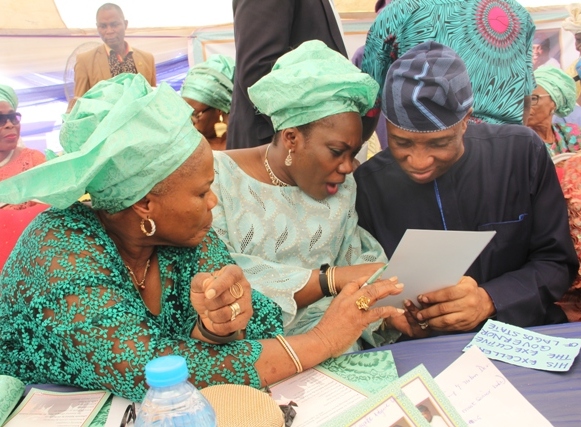 The Lagos State Governor, Akinwunmi Ambode, on Friday charged all Muslims across the state not to relent in engaging in acts of charity, which fosters mutual understanding and unity within the country.
The Governor, who spoke at the 2018 Eid-Ul-Fitri celebration at Evan Square, Ebute Metta, through the Secretary to the State Government, Tunji Bello, added that Muslims should not forget the lessons of the holy month, which is the fear of God and care for the needy as they celebrate the successful conclusion of this year’s Ramadan fast.
According to Ambode: “It is my pleasure to be in your midst on this occasion to celebrate with you this year’s Eid-El-Fitri festival marking the end of yet another glorious month of Ramadan. I pray that our fast and sacrifices will be accepted and rewarded bountifully.”
He noted that a year ago, this same occasion was celebrated in 20 locations across Lagos State in furtherance of the commitment of the State Government to promote all inclusive governance and ensure that Lagosians feel the pulse of good governance irrespective of their location within the state.
He added that apart from the festivities and the promotion of the social bonding, the occasion is also a way of showing gratitude to God for his love, which made it possible for Lagosians to experience an atmosphere of peaceful coexistence and religious harmony that has contributed significantly to the progress and prosperity that has been achieved in the state.
Ambode said: “We appreciate the infinite mercies of Almighty Allah in preserving our lives to partake in today’s celebration with divine favours and spiritual Guidance which would ensure that Lagos continues to thrive in this atmosphere of peaceful coexistence, harmonious relationship and unprecedented infrastructural growth and socio-economic development.”
He explained that the Government has made giant strides in the march towards the SMART CITY of everyone’s collective dreams, adding that Lagosians should keep supporting the Government through their commitment to the discharge of their civic obligations.
Ambode said the Government would achieve the aspirations to build a modern city state that is liveable, in which all citizens have the opportunity to achieve their dreams.
He stated that it is a known fact that Islam being a religion of peace can only be sustained in a just and fair society, stressing that the government would continue to run an all-inclusive governance based on the principles of social justice and fairness to all, irrespective of religious, ethnic or gender backgrounds.
The Governor urged all Lagosians to pray continually for the State in particular and the country in general as the elections approach in the year 2019.
Earlier in his welcome address, the Commissioner for Home Affairs, Dr. Abdul-akeen  Abdul-Lasis, represented by the Permanent Secretary Ministry of Physical Planning and Urban Development, Boladele Dapo Thomas, described Governor Ambode as a man of his words because the gathering came about as part of his electioneering campaign promises to run an inclusive government.
The event attracted representatives of the First Lady, Funsho Raji, and other dignitaries, including the Chairman of the Civil Service Commission, Taiwo Oyemade; Chairmen of Lagos Mainland Local Government and Yaba Local Council Development Area, Hon. Omolola Essien and Hon. Kayode Omiyale; and several Muslim faithful.