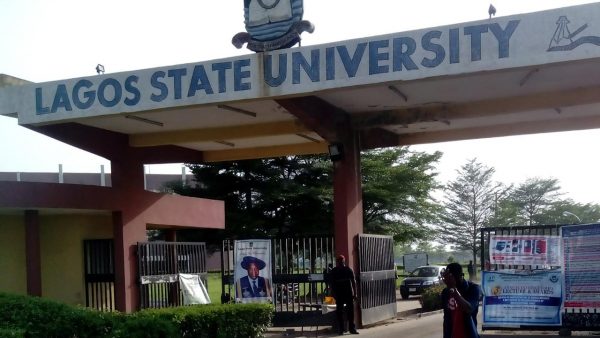 The Lagos State Governor, Akinwunmi Ambode, has approved regularization for all the landed property owned by the Lagos State University that have encroached upon by illegal occupants.
This was disclosed by the Special Adviser to the Governor on Education, Obafela Bank-Olemoh.
Bank-OLemoh therefore advised all the illegal property owners and encroachers on the Lagos State University land to regularize such properties with the institution and assume the position of legal occupants as tenants with the University.
Bank-Olemoh, who disclosed this on Thursday in Lagos at a stakeholders’ meeting held with leaders of community development associations and other key stakeholders in the community, urged affected illegal occupants to take advantage of the State Government’s magnanimity and regularize their title deeds on the said land.
The Special Adviser said the decision of the State Government to have them regularize their properties was informed by the resolve to follow the path of peace with the community members.
He urged the community members to cooperate with the state government to make the regularization exercise realizable and the entire process seamless, stressing that the move was not one of such initiatives that would be thwarted along the way.
He noted that Government’s intention is not to demolish but regularize majority of the properties that have been illegally encroached upon, stressing that the level of encroachment at the Ojo campus of LASU is approximately 75 per cent, a situation that is hindering the development of the Institution.
Bank-Olemoh said: “The level of encroachment has restricted further expansion and development of new programmes in the University, which has impeded the goal of being a first class University of the founders’ dream.
“Generally, over 80 per cent of LASU land measuring over 700 HA had been acquired by settlers illegally, leaving an estimated 160 HA for LASU development, which is grossly inadequate.
“Moreover, there is a compelling reason to reclaim the encroached land, particularly now that LASU is now a residential University.”
The Special Adviser noted that from December 18, 2017, officials of the State Government and LASU will be visiting the affected houses with a view to placing on them notices on the need for the occupants to regularize their properties.
He said to become a bona-fide LASU tenant, an illegal occupant is expected to log on onto: llrp.lasu.edu.ng and enter their VBI Number and passcode wherein they are expected to upload and update all personal information as well as pay the registration fee of N100,000.
Bank-Olemoh added: “Fees can be paid online or in the alternative one can print an invoice from the portal with a view to paying directly at the bank.
“It is important to stress that this registration fee of N100,000 will be deducted from the final registration fees upon the completion of the regularization process.
“Again, under no circumstance should the fees be paid in cash to anybody.”
Bank-Olemoh noted that the regularization exercise will be open between now and April 30, 2018, adding that failure to complete the regularization exercise before the deadline will attract 25 per cent increase in the regularization fees in the first instance, covering between May 1 and June 30, 2018, while a 50 per cent increase in the regularization fees will be visited on defaulters covering the final penalty phase of July 1 to September 30, 2018.
He stressed that any property that is not registered or regularized by the September 30, 2018 deadline will be repossessed by the State Government, adding that upon the regularization exercise, annual land use charges and rental fees would be payable to the State Government and LASU respectively.
Earlier, the Vice Chancellor of LASU, Prof. Olanrewaju Fagbohun, described the move as a step by the Ambode-led administration to seriously pursue lofty initiatives that will further signpost LASU as an institution of international standard and a citadel of learning.
Fagbohun maintained that if the land regularization issue is not quickly done, it could hamper the growth and development of the institution to its full capacity and status, adding that the encroachment issue has over the years affected the capacity of the institution to admit the approved numbers of admission seekers by the National Universities Commission.
In the same vein, the State Commissioner for Information and Strategy, Steve Ayorinde, said the move was in line with the promise made by the Governor during the electioneering period that his administration will not inflict unnecessary hardship on the citizenry, but will instead follow the path of peace in addressing infractions.
The Commissioner for Physical Planning and Urban Development, Wasiu Anifowoshe, described the gesture by the state government as a rare opportunity as the encroachers, under the new arrangement, will not be subjected to the payment of the regular fees charged for acquiring necessary building permit.
Anifowoshe said the state government has reduced the regularization process drastically in order to make it very easy for the occupants of the encroached lands.