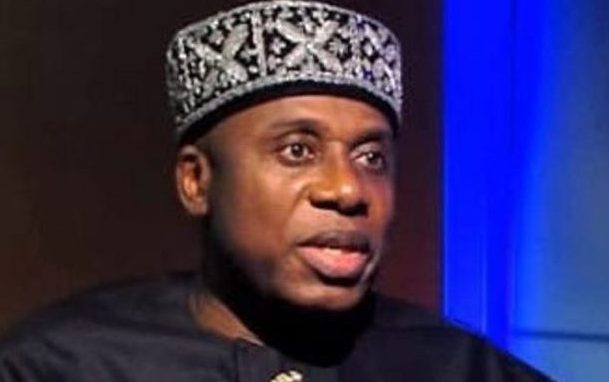 Overwhelmed with disbelief, I chuckled multiple times as I read the “monumental” Reuben Abati’s opinion piece published by The Eagle Online on August 4, 2020, titled: “Nigeria and Chinese Loans.” Unfortunately, the piece was a monumental misadventure in dissecting the trending issue of Nigeria and Chinese loans and the terms of the loans.

More tragic was Abati’s inglorious, uncalled for, cut and join attempt to portray the Minister of Transportation, Rt. Hon. Chibuike Rotimi Amaechi, as the shady villain that has plunged Nigeria into his imaginary intractable apocalyptic debt mess with China.

Why Abati decides to tow this insidious path in this discourse is indeed befuddling. While I am open to give him the benefit of doubt that he may have been innocently ignorant of the facts of the Chinese loans and the nature and import of the terms of the loans, many I know are ready to swear by Amadioha or Sango that Abati’s piece was a disingenuous attempt to conflate and obfuscate the issues, muddy and distort the discourse and deliberately mislead his readers. With Amaechi as his prime target in his barely concealed hit man piece.

First, let’s look at the obvious and known facts of the matter of the Chinese loans, the terms of borrowing and its import; as against the beer parlour gists and pepper soup joint arguments of Rueben Abati. Data from the Debt Management Office shows the total borrowing from China of $3.121 billion as at March 31, 2020 are concessional bilateral loans (not high interest rate commercial loans) with interest rates of 2.50 per cent per annum, tenor of 20 years and Moratorium (grace period) of seven years. The China loans represents only 3.94 per cent of Nigeria’s total public debt of $79.303 billion as at March 31, 2020.

The Chinese loan terms are compliant with the provisions of Section 41 (1a) of the Fiscal Responsibility Act, 2007. In addition, the low interest rate reduces the interest cost to government, while the long tenor enables the repayment of the principal sum of the loans over many years. These two benefits make the provisions for debt servicing in our annual budget lower than they would otherwise have been if the loans were on commercial terms.

The rigorous process of taking any loan at the federal level, inclusive of the Chinese loans, involves the Ministry of Finance, Budget and National Planning working with the MDAs under whose portfolio a proposed loan falls and also with the DMO. Thereafter, the approval of the Federal Executive Council is sought. It is only after the approval by FEC that Mr. President requests for the approval of the National Assembly as required by Section 41 of the Fiscal Responsibility Act, 2007. Carefully note that it is only after the approval of the National Assembly that the loans are taken and Nigeria begins to draw down on the loans. In summary, borrowing seems to be a joint activity between the Executive and the Legislative arms of Government. Additionally, the loan agreements are reviewed by the Ministry of Justice and the legal opinion of the Attorney General of the Federation and Minister of Justice is obtained before any External Loan Agreement is signed. The $3.121 billion Chinese loans are project-tied borrowing. The projects in the Ministry of Transportation, which Amaechi superintends, include the Nigerian Railway Modernization Project (Abuja to Kaduna section and Lagos to Ibadan section), amongst others.

The infrastructural and economic impacts of these projects are evident and visible. The Abuja to Kaduna rail line has become a major source of transportation of commuters and cargo between Abuja and Kaduna, while the Lagos-Ibadan rail line when completed will ease human and cargo traffic on the busy Lagos-Ibadan Expressway. The projects also have the added benefits of job creation, not only by themselves but also through direct and indirect service providers, a number of which are Small and Medium Enterprises. It is widely accepted that investment in infrastructure is one of the most effective tools for countries to achieve economic growth and development. Using loans from China to finance infrastructure is thus in alignment with this position. We should also not forget that like all other external borrowing, the loans from China were approved by the National Assembly.

The contentious issue of waiving of Nigeria’s sovereign immunity and providing sovereign guarantee by Nigeria to China for the loans is a standard clause in this type of foreign borrowing. The citizenry should understand that there is a difference between international diplomatic immunity, which has to do with a nation’s sovereignty, independent existence; and commercial immunity, which has to do with a nation’s commitment to ensure repayment of foreign loans taken by that country. The misconception of those arguing against the waiving of sovereignty clause in the loan agreements are looking at the diplomatic immunity as against commercial immunity of a country when it has to do with loans, as there is no concession whatsoever made as it concerns Nigeria’s diplomatic immunity. Concessions relating to immunity for the purpose of provision of commercial guarantee are not uncommon in loan agreements between sovereign countries.

So commercial immunity is in essence a mere guarantee that allows a nation that provides the loan, an opportunity, right and power to claim back the financial advances made to another nation. It does not extend to concession of diplomatic immunity or sovereignty, by which you now surrender the rights, privileges and independence of a nation state. But it is a commercial term that is restrictive, exclusive to an asset, a commercial asset for that matter in the event of default in the loan repayment terms. Nobody had signed out Nigeria’s sovereignty. A sovereign nation is a sovereign nation, no nation can recolonise Nigeria on the basis of any China loan agreement. As of today, there’s no credible evidence of any danger of Nigeria losing its sovereignty to China because of the loans. Nigeria explicitly provides for debt servicing of foreign loans in its annual budgets. This means payment of loans is planned for.

Prof. Bolaji Akinyemi, Professor of Political Science and former External Affairs Minister, explained the waiving of sovereignty clause in loan agreements between sovereign nations in a recent interview. He said: “Let us not be emotional about it, and there’s a standard clause in these agreements. The clause says: ‘Country X cannot plead his sovereignty, to protect it, if there is a need to go to arbitration.’ You cannot say because I am a sovereign country, you cannot drag me to court for arbitration. That is standard procedure. Economic relations are different from political relations. In political relations, you can plead your sovereignty to protect you but in economic relations, you cannot plead your sovereignty to stop you from paying back your foreign loans.”

It is undeniably disconcerting that Rueben Abati on a serious national discourse like this, found it more convenient to quote and propagate the propagandist views and comments of his partisan, opposition party, the Peoples Democratic Party, and his fellow party member and 2019 PDP presidential candidate, Alhaji Atiku Abubakar, while he completely avoids the unbiased, non-partisan contributions of the likes of Prof. Akinyemi and bright legal minds like Femi Falana and Olisa Agbakoba.

Abati’s ill-fated attempt to make Amaechi the fall guy before Nigerians for the Chinese loans is unacceptably irresponsible. He tried to depict Amaechi as the alpha and omega when it comes to taking the loans related to the rail projects in his ministry when that is not actually the reality. The Supervisory Minister role in foreign borrowing is limited and only complementary to the Ministry of Finance that takes the loan on behalf of the Federal government, and the Ministry of Justice that reviews and vets all foreign loan agreements. Above all, any foreign loan has to be approved by the National Assembly.

Besides, Abati’s allusion to unethical practices against Amaechi in the borrowing process is indeed a sad commentary of his understanding of the issues. Reducing a serious and rigorous government business of the borrowing process that involves several parties in the executive and legislative arms of government to his pedestrian “my brother, bring money make we do business, chop together”, says a lot about his ignorance or willful mischief on this matter. Perhaps, that’s the way government business was done and conducted in the previous administration Abati was a significant member of. And not unexpected, that is the only way he seems to know and think government business can be conducted. What a sad trajectory. Is it not curious that some of the loans (about $2.473 billion, in total) from China were signed and taken during the same previous President Goodluck Jonathan government that Reuben Abati was the Spokesman of, with similar borrowing terms? Yet, Abati did not write a long treatise to condemn the loans, its terms and criminalise borrowing from China, then. Maybe he was keeping to the truism of not to talk while “chopping”. One can only imagine the mind-blowing hypocrisy. For Abati’s information, as it concerns the loans related to Amaechi’s Ministry of Transportation, the agreements do not have or make provisions for “bring money, let’s chop together.” The contract money is paid directly to the contractor by the lender after each specified milestone is certified to have been satisfactorily completed by different organs of the Federal Government.

Disingenuously, Abati tried to draw comparisons between the Chinese loans and the well known pending $9.6 billion Process & Industrial Development matter. That was like comparing apples to oranges. Like most right thinking Nigerians, I see no bases to put these two disparate matters on same pedestal, apart from the purpose of fear mongering and to galvanise unwarranted public animosity against borrowing, whether from China or anywhere else. While one is about bilateral concessional borrowing between two sovereign nations, Nigeria and China, for infrastructural projects (completed and ongoing), the other, the P&ID case, is a completely different ball game of an alleged contract gone awry that is now being disputed in court. Even more fatuous and ludicrous was Abati’s reason for drawing a similarity between both matters because of the presence of words as “arbitration”, “property”, “enforcement of arbitral award” in both matters. Haba! Even a sophomore law student would tell you for free that those words and phrase are not unusual in most standard contract and/or loan agreements.

To support his arguments, Rueben Abati wrote about his class at the University of Maryland, in an American Foreign Policy Process class taught by Hodding Carter III, where he learnt or read about “The Coming Conflict with China”. In contrast, I want to let Abati know that in my class at Oxford University, Said Business School, in a Globalisation module taught by Marc Szepan, we learnt how the world has evolved over the years into a global village, where sovereign nations are largely inter-dependent on each other and also borrowing from each other and foreign financial institutions. Nigeria borrowing from China or from Western nations or foreign financial institutions for infrastructural development should not be criminalised or reduced to an Amaechi punching event, at least until we change our laws and agree as a country that Nigeria should not borrow anymore.

Agreed, as a nation we need to have this discourse, a holistic conversation about our foreign loans/debts, but constricting the discourse to be about this present Buhari administration, about one arm of government, about one minister and government official (Amaechi), or only about Chinese loans/debts, is not the right way to go about it. And further reducing the dialogue to “a Chinese getting license to sell roasted corn by the road-side in Nigeria” or “a certain Amaechi has signed off Nigeria’s Presidential Villa to the Chinese to get cheap loans to build a rail line to Port Harcourt (quoting Abati),” only exposes the dubious motives of Abati. These, especially the latter, will provide no value to the conversation but would only deem Abati a wailing child, who is embittered, and fixated on Amaechi for supposedly taking away his lollipop