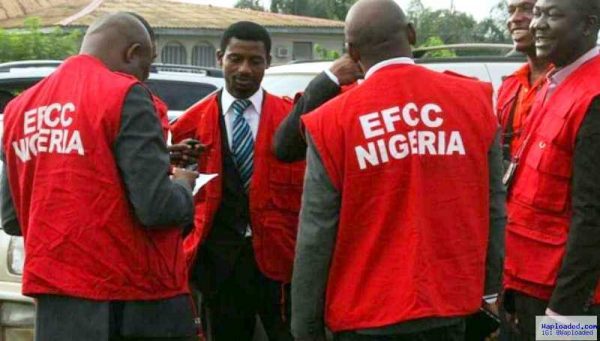 Mohammed Dangana, a senior official of the Economic Community of West African States Commission, on Monday agreed to forfeit N245 million asset following his decision to enter a plea bargain to end his ongoing trial.
The News Agency of Nigeria reports that Dangana, an Executive Assistant to the Financial Controller, ECOWAS Commission Secretariat, Abuja, is being tried by the EFCC on a 15-count charge bordering on criminal diversion of funds, misappropriation and money laundering to the tune of over N587.7 million.
He was arraigned on October 18, 2019 before Justice Okon Abang on a charge in which the prosecution accused him of conspiring with two others, said to be at large.
Dangana was said to have diverted funds belonging to his employer, with which he, among others, acquired property in Abuja, including a plot of land he allegedly bought in Guzape (Abuja) at N200 million and an apartment in Garki at N42 million.
At the resumed trial on Monday, the EFCC lawyer, Wahab Shittu, was about to call his fifth witness when the defence lawyer, Chief Chukwuma Onyezubelu, told the court that his client was interested in entering a plea bargain arrangement with the prosecution.
Onyezubelu said parties were already talking.
He prayed the court for an adjournment to enable parties conclude talks on the issue.
Shittu confirmed the development.
He said he was not opposed to the defence’s move to plea bargain.
“The offer of the defendant takes care of what the state would like to achieve at the end of proceedings and in the event of conviction, namely: an offer to change the plea of the defendant,” he said.
Shittu said the defendant had also offered to forfeit to the state the property which formed the subject of the case.
According to him, the property is worth N245 million.
He added that Dangana had equally agreed to plead guilty to an amended charge and to be given either a custodial sentence or fine, depending on what the court decides.
“It is in respect of that third option, which is the sentencing, whether it should be custodial or fine that we are still trying to agree on, although the final decision is for the court to make,” Shittu said.
He also said the decision whether or not to accept the offers made by the defendant depended on the disposition of the EFCC.
He said: “I will return to my client, if they are comfortable with the offers, then I have no option.
“We will be ready to continue with our case if my client objects to the bargain.
“I am not objecting to the request for an adjournment to enable us finalise the arrangement.”
The EFCC lawyer added that he brought three witnesses to court, but felt it would be unreasonable to bother the court to proceed with trial when parties were working on a plea bargain arraignment.
Justice Abang, in his ruling, noted that although the case was scheduled for continuation of trial, the defence lawyer sought an adjournment on the grounds that the defendants intended to change his plea.
Justice Abang said though the prosecution had called four witnesses, Section 270 (2) of the Administration of Criminal Justice Act allows plea bargain provided the trial had not reached the point where the defendant was being called upon to enter defence.
The judge then adjourned until April 8 for parties to file their plea bargain agreement, failing which there would be continuation of trial.