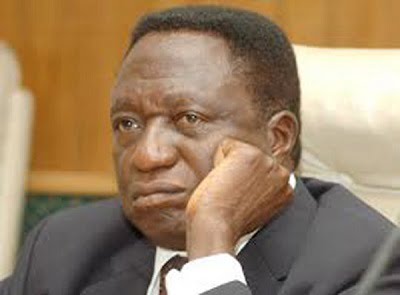 An ex-Provost Marshal of the Nigerian Air Force, Air Commodore Najeem Sanusi (retired) has told a Federal High Court how a former Registrar of the Joint Admission and Matriculation Board (JAMB), Professor Adedibu Ojerinde, funded the establishment of a radio station jointly owned by them.

The radio station, incorporated under the name – Ifelodun Communication Nigeria Limited – is one of the companies and property Ojerinde is accused of acquiring with the funds he allegedly diverted while in office.

Ojerinde is being tried on 18 counts marked: FHC/ABJ/CR/97/2021, by the Independent Corrupt Practices & other related offences Commission (ICPC), in which he is accused among others, of diverting public funds estimated at over N5.2 bilion.

Testifying as the second prosecution witness, Sanusi said he is from the same Igboho community in Oyo State with Ojerinde and he brought the idea of establishing a radio station to the ex-JAMB boss.

Led in evidence by an ICPC lawyer,  Bunmi Olugasa, Sanusi said Ojerinde agreed to fund the project and introduced one of his subordinates in office and personal assistant, Jimoh Olabisi, who provided funds at the instruction of the ex-JAMB boss.

The witness said the radio station was located in Ojerinde’s house at the Owode area of Igboho.

Sanusi said: “During our deliberation, the defendant (Ojerinde) said any matter that would be related to financial issues should be directed to Mr. Jimoh Olabisi.

“Mr. Jimoh Olabisi that the defendant introduced to me was the one that provided the funds for the licence, the purchase of the land and others.

“The procedure was that I will tell the defendant what needed to be done and he will instruct Mr. Jimoh Olabisi to make the funds available,” Sanusi said.

The witness added that he has records – photocopies of some of the payments that were made by him, adding that the original copies of the documents are with Jimoh Olabisi “because he was the accounting officer, in the course of registering the radio station.”

When Olugasa attempted to tender some of the documents identified by Sanusi, defence lawyer, Ibrahim Isiyaku (SAN) objected and argued against its admission.

Justice Obiora Egwuatu adjourned till 7 and 8 for ruling and continuation of trial.

While being cross-examined on Monday, Ojerinde’s personal lawyer, Peter Oyewole, who claimed to have incorporated companies and bought property for Ojerinde, said he warned his client about the implication of running other businesses as a public officer.

“I did advise him that engaging in other businesses was a breach of the code of conduct as a public officer,” Oyewole said.

Oyewole said he extracted any authority or consent in writing on the purchase of property and registration of companies from the defendant, adding: “All the instructions given to me by the defendant were verbally communicated to me.”