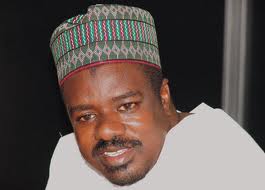 A Federal High Court, Abuja on Tuesday granted N500 million bail to former Governor Saminu Turaki of Jigawa State, charged with alleged money laundering to the tune of N36 billion.
The judge, Justice Nnamdi Dimgba, ordered Turaki to produce two sureties in the sum of N250 million each.
Dimgba said that the sureties must either be a businessman or a civil servant of the rank of a director and must have a landed property in the FCT.
He said the sureties must show evidence of tax payment to the Federal Inland Revenue Service.
The judge also ordered Turaki to deposit his international passport with the court’s registry and must report to the headquarters of the EFCC every first working day of every month.
He ordered remand of Turaki in Kuje Prison pending the perfection of the bail conditions, and adjourned the case until September 19 for hearing in line with first adjournment by a Dutse Federal High Court.
Justice Sabi’u Yahuza of the Duse Federal High Court had earlier adjourned the case until September 19.
Turaki was arraigned alongside three companies, INC Natural Resources Ltd., Apel Construction Limited, and WideHeart Construction Limited on a 32-count charge bordering on money laundering.
Turaki pleaded not guilty to the charges.
Earlier, Ahmed Raji (SAN), the defence counsel, had prayed the court to grant his client bail, adding that the defendant had governed a state for eight years.
Raji added that the defence was not aware of the arraignment as they would have come with a proper application.
He urged the court to exercise its discretion as the defendant had spent two weeks in detention.
The prosecuting counsel, Mohammed Abubakar, opposed the oral application.
Mohammed said the defendant was arrested following a bench warrant issued in September 2014 by Justice Sabi’u Yahuza.
He argued that the prosecution only arrested the defendant on July 4, adding that if granted bail he might not make himself available for the trial.
The News Agency of Nigeria reports Turaki was first arraigned before Justice Binta Murtala Nyako of the Federal High Court.
The case was later re-assigned to Justice Sabi’u Yahuza of the Federal High Court, Dutse, Jigawa after Turaki objected to the jurisdiction of the court in Abuja.
He was subsequently re-arraigned at the court in Dutse on a 32-count charge of misappropriating N36 billion while in office.