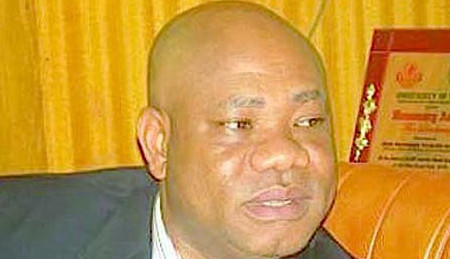 The defendants are being prosecuted by the Economic and Financial Crimes Commission (EFCC).

They were first arraigned in 2016 before Justice Saliu Saidu.

They had each pleaded not guilty to the charges and were granted bail.

The case was, however, re-assigned to Justice Ayokunle Faji after Saidu was transferred from the Lagos division of the court.

Since the case was transferred to Faji, the charge has been amended for, at least, four times, with the defendants taking pleas to each amendment.

They were re-arraigned for the fourth time on March 6, 2019.

Outbreak of COVID-19 pandemic had effects on the trial as on other proceedings in court.

Prosecution closed its case in January 2020, after calling six witnesses and tendering 26 exhibits.

Defence then made a no-case submission, arguing that prosecution had not made out any prima facie case against the defendants.

The no-case submission failed, as Faji on March 13, 2020, dismissed the application and ordered defence to open its case.

An appeal against the ruling also failed at the Court of Appeal, which delivered judgment on Sept. 30, 2021.

Defence was, thus, asked to open its case.

Led in evidence by defence counsel, the first defendant (Thomas) began his evidence-in-chief.

Fielding questions on his identity and professional career, he introduced himself as a medical practitioner and a Consultant in cardio-thoracic surgery who ventured into diverse fields.

He told the court that he was an entrepreneur who dealt on various agricultural businesses such as poultry farming and crop farming.

He told the court that he was also into importation of medical consumables and equipment, and had been involved in administration at various levels.

Thomas said he had practised as a cardio-thoracic surgeon in public hospitals including Lagos University Teaching Hospital (LUTH).

According to him, he was the first home-based cardio-thoracic surgeon in LUTH.

He added that he was still being invited for operations when he became a commissioner for health.

The defendant told the court that he took part in the first open heart surgery in Lagos State which earned him a plot of land at Lekki as a gift by the state.

He told the court that he received salaries for all of his services, adding that he maintained a domiciliary account and converted his naira to dollars.

The defendant said that he imported and sold medical pace makers and that payments for the pace makers were made in dollars.

He said “I was so comfortable that in 2003, my account officer called to inform me that I had not been paid for three months and I did not know.”

The defendant also told the court that he maintained a poultry farm which had the capacity to stock 50,000 birds.

The court adjourned the case until Sept. 30 for continuation of trial.

In the amended charge numbered FHC/L/457C/2015, EFCC alleged that Thomas and his wife, who is said to be at large, had on July 3, 2015, conspired to move out of the court’s jurisdiction, the sum of $2.19 million, proceeds of unlawful activities.

The defendant was said to have sought the assistance of one Bamidele Ibitoye to help to move the money without going through a financial institution.

They allegedly concealed the origin of the said sum.

The second defendant was alleged to have on July 15, 2015, falsely told  Afeez Mustapha, an investigating officer of the EFCC, that he was the owner of the said money.

They also contravene Sections 39(2)(b) of the Economic and Financial Crimes Commission (Establishment) Act of 2004.