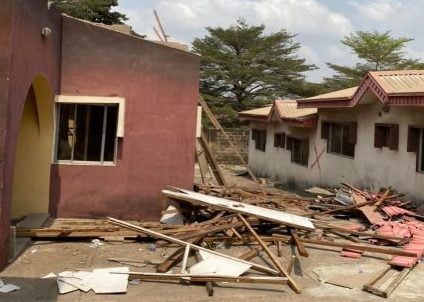 An alleged land grabber in Ibadan, Sesan Olooto, on Monday shunned the invitation of the Inspector General of Police, Mohammed Adamu, over the destruction of a property worth N500 million in Orita Challenge area of Ibadan, the Oyo State capital.

Adamu had summoned Olooto and his team to Abuja after he received the petition filed by a Canada-based cleric of The Apostolic Church, Pastor Edward Taiwo Soetan, seeking help to halt the threat to his life and further destruction of his property.

It was gathered that Adamu had directed a Deputy Commissioner of Police, Kolo Yusuf, to mediate in the rift between Olooto and Soetan, who was represented by his counsel, Oyebamiji Akinlolu Segun.

According to reliable source, Yusuf, who is the Commandant of the Special Tactical Squad, has rescheduled the parley for Tuesday (today) as he insisted that the alleged land grabber must obey the instruction of the highest police chief on the fact-fighting investigation.

“In fact, DCP Kolo Yusuf was unhappy that Sesan Olooto, a man who was released on bail to appear in Abuja, and his men decided to shun the IGP’s invitation. The Commandant has, therefore, summoned him and his team to appear unfailingly Tuesday (today), failure of which no one knows what may happen,” the source said.

According to him, despite the intervention of a retired Deputy Commissioner of Police who was alleged to be sympathetic to Olooto and his accomplices, the head of STS maintained that personal appearance of the alleged land grabber was non-negotiable.

Earlier, a team of STS, led by Deputy Superintendent of Police Dogo Mathew, who was accompanied by Adeshina Adewale and about 12 crime busters, had apprehended Olooto, who was detained at the Orita Challenge Police Station, Ibadan, but released following his pledge to appear in Abuja before the police chief.

It would be recalled that Soetan had petition Adamu and Oyo State Commissioner of Police, Ngozi Onadeko, over Soetan Estate, which included a petrol station, 16 blocks of flats and parcels of undeveloped land.

Soetan, in the petition filed by his counsel, Joy I. Amosun of AOC Solicitors and Attorneys, had alleged that the suspected thugs threatened to kill him over the property he acquired 18 years ago.

“As if that was not enough, our client is now being confronted that whenever they see him around that land, they would kill him,” his counsel said, adding: “Our client had to run for his dear life and relocated to Canada as the threat is too much.”

“These people in question, that is, Sesan Olooto, Kehinde Apampa, Adebayo, Sina Adeleke, Ismaila Bolanrinwa Amugiri, Biobaku Alaba Abiodun and some other unknown hoodlums would come to the land fully armed with dangerous weapons such as guns, daggers, cutlasses, etc and they have even turned the place to the base stating that whenever they found anybody around they would maim and kill the person,” the petitioner emphasised.

Soetan told Adamu that he had been facing persecution over the land which he bought for commercial and residential purposes and that Olooto said he got judgment over the land in 2004, but came for execution in 2016.

His counsel stressed: “Upon verification, it was discovered that the said judgement was not against our client but in order not to sleep his right, he instructed his counsel to approach court to challenge the authenticity of that judgment.”

The petitioner said having taken the matter to court, it was believed that the alleged land grabbers would steer clear of the land in question, but yet they continued, on daily basis, to keep disturbing occupiers of the properties.