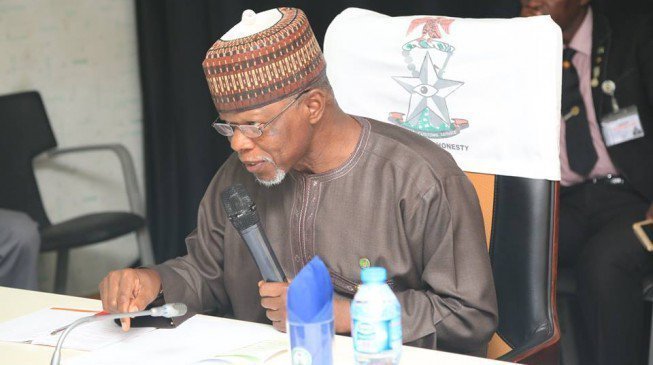 A former Assistant Comptroller General of Customs, now the representative of Osun East Senatorial District, Senator Francis Fadahunsi, has accused the Controller General of Customs, retired Colonel Hameed Ali, of spending N1.6 billion to recruit 3,200 persons into the Nigeria Customs Service.
The Senator levelled the accusation in an interview with The PUNCH.
Fadahunsi said this against the backdrop of the position of the Muhammadu Buhari Administration that it was out to combat corruption.
He said rather than abate, corruption in Customs was growing.
He cited two examples: the recruitment being carried out by Ali and the award of contract for the furnishing of the Customs Headquarters that is yet to be completed.
He said rather than conduct interviews through the normal channel, Ali gave the job to a consultant, who billed the government N1.6 billion to recruit 3,200 persons into the Service.
Fadahunsi said: “The CG wants to recruit 3,200 persons and he paid N1.6 billion to a consultant to recruit 3,200 persons.
“The money is not for training but to just recruit them.
“I asked him if the Nigerian Army ever used consultants to recruit personnel and he said no.
“He said Customs officers are corrupt and he is bringing in a consultant to recruit 3,200 persons and he will pay the firm N1.6 billion.
“Are you recruiting five million people?
“The N1.6 billion is even in the budget and that is one of the reasons the budget was being queried by the leadership of the Senate.”
On the Customs Headquarters, Fadahunsi said: “Customs headquarters was awarded for N2.7 billion then, but today the project is going to about N30 billion.
“The project has not been completed but the furniture contract for the uncompleted building has been awarded.”
On the closure of the country’s borders, Fadahunsi said Nigeria was the loser while some Customs personnel are smiling to the banks.
He said: “Customs officers allow traders to smuggle contraband goods and items into the country and now they are going round to raid their shops, it is wrong.
“They are already inside the country and what they should do is to encourage them to come and pay.
“I tell you, they will come and pay.
“I told the Comptroller General of Customs, Colonel Hammed Ali (retd), that his border management is poor.
“You don’t need to carry guns and start running after those people who have settled your boys.
“It is wrong, they paid bribes to the boys at the border and they are still running after them now.
“The border management is poor and it has failed.
“The same failure is seen at the ports, and that is the cause of port congestion.”
On Ali’s management of Customs, Fadahunsi said: “Soldiers are not trained to generate revenue.
“They are trained to buy ammunition and to kill.
“This man met more than 30,000 personnel in the Nigeria Customs Service, and today they are not more than 15,000 left.
“He has sacked all of them.
“If you see the fraud in the Customs now, you will be shocked, but nobody must talk.
“They make noise to cover this up, but if you go into their books, you will be surprised.
“Who is fooling who?
“If Mr. President sees what the man is doing, he will run out of the country.
“That is why I am saying that Mr. President should put a technical person from Customs there; if not, the man will run the place aground.”