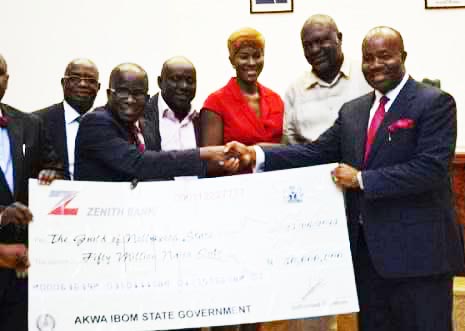 Governor Godswill Akpabio of Akwa Ibom State has redeemed the N50 million pledge to the Nollywood industry.
President of Association of Movie Producers, Zik Zulu Okafor; President of the Directors Guild of Nigeria, Andy Amenechi; and Nollywood star actress cum producer, Stephanie Okereke Linus, were on Monday in Uyo, the Akwa Ibom State capital, to receive the N50 million largesse to the Nollywood industry.
Akpabio made the pledge to the movie industry during the celebration of 20 years of the movie industry that the movie stars had in Lagos State with President Goodluck Jonathan in attendance.
Information reaching The Eagle Online has it that Okafor led few other Nollywood practitioners to the Government House in Uyo, where the governor redeemed his pledge.
Also spotted at the occasion was the National Secretary of the Actors Guild of Nigeria, Abubakar Sanni Yakub.