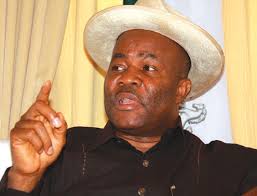 Governor Godswill Akpabio ofAkwa Ibom State has attributed backwardness in the country to the attitude of many people in departing from the ways of God to the worship of gods.
Akpabio, who said this on Wednesday when the President of Christian Council of Nigeria, Most Rev. Emmanuel J. Udofia, paid him a courtesy visit at the Governor’s Office Uyo, noted: “Our nation is tottering today because many people have turned away from God.
“God created us to praise Him.”
The governor, who observed that many have neglected God’s instructions to worship idol, said: “Many have set up foul altars different from that of God.
“So many have also permeated their ranks and files within the christendom to deceive people.
“So many have gone to look for powers from India and from the celestial world in order to attract people to the church.
“Many people are no longer preaching salvation, they are preaching prosperity.
“Prosperity may be sufficient for man to live in, but it is not sufficient for salvation.”
Akpabio said he came into office as governor with a determination to transform Akwa Ibom State, with full consciousness that God is the source of every great edifice.
“When we stated campaigning, we shouted: Let God’s will be done.
“When I won, I knew yes, indeed God’s will was done in Akwa Ibom State.
“From day one, we decided to partner with the church.
“When I was elected, I went to church for thanksgiving and when I was sworn-in into office, I went to church for direction.”
The governor extolled the prevalence of religious harmony in Akwa Ibom State, adding: “When we give a token of N10 million to CAN as a revolving loan, we also made available about N10 million to the Muslim population.
“Also, as I sponsored Christians to the Holyland, I also sponsored Muslims to Mecca.
“The free and compulsory education in our state is opened to all Nigerian children who are resident in Akwa Ibom irrespective of tribe or religion.
“I think what is lacking in Nigeria is for us to go back to God and God is love.
“Let’s take all the questions to God.
“He will provide the answers for Nigeria.”
Udofia, who said the Christian Council of Nigeria was in the state for its 28th General Assembly, thanked God for using the governor to transform Akwa Ibom State.
Udofia lauded the governor for always partnering the church and for training chaplaincy for schools in the state, adding: “We thank God that He has planted you in this place.
“I want to thank you for the training of chaplaincy for our schools and I want to appeal that those who would be trained for this chaplaincy be those that will of example to our children.”