The swearing-in of Ondo State governor, Oluwarotimi Akeredolu, for a second term in office will be low key.

Chairman of the Inauguration Committee and Deputy Governor-Elect, Lucky  Aiyedatiwa,  who stated this at a press briefing in Akure, said COVID-19 protocols would be observed during the six-day event.

He said the President of African Development Bank, Adewumi Adesina, would deliver the second term inauguration lecture of the governor.

The inauguration is scheduled to hold Wednesday next week.

Adesina would speak on the topic: “Towards a New Nigeria: From Federal Fatherism to a Commonwealth.”

Aiyedatiwa listed other events lined up for the inauguration to include inauguration dinner, commissioning of projects, schools debate, gyrations by Kegites, foundation laying for Governor’s Lodge.

The Deputy Governor-elect however said the events would be low-key for obvious reasons.

He said: “The Schools debate and presentation of awards won by Ondo State public school is a well-thought-out component of the inauguration ceremonies with a specific focus to elevate and celebrate our youths in the state.

“It is also to serve as the melting pot for the general public consisting of parents, teachers, students and government  thereby ensuring the involvement of all layers in the society in the enthroning of the government they truly voted in.

“Governor Akeredolu believes in the involvement of the younger generation in the journey to the future and will seize every opportunity to promote their excellence in conduct and scholarship in public space.” 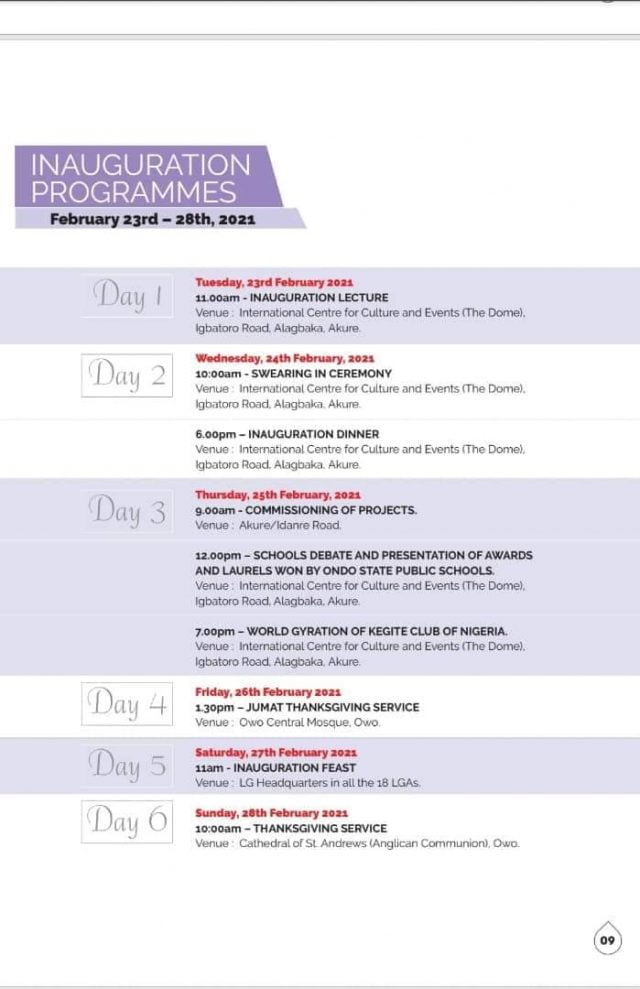 2023: Akeredolu will decide whether we vote for Tinubu or not — Deputy Governor