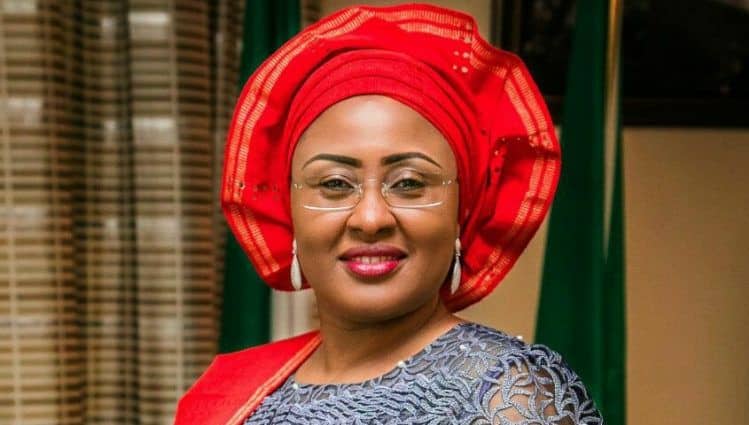 The First Lady of Nigeria, Hajia Aisha Buhari, sent the audience reeling in laughter on Tuesday at the opening of the 22nd National Women’s Conference of the Committee of Wives of Lagos State Officials when she mimicked the Rivers State Governor, Nyesom Wike.

Wike had at the ceremony in Lagos State back the reelection of the Lagos State Governor, Babajide Sanwo-Olu.

The Eagle Online recalls that Sanwo-Olu is of the All Progressives Congress, while Wike is a chieftain of the Peoples Democratic Party.

In her speech to declare the conference open, the wife of President Muhammadu Buhari then poked a statement made popular by one of the songs to which Wike dances, especially since he began his face-off with the PDP leadership.

She spoke directly to Wike as she declared open the conference at the Convention Centre of Eko Hotels and Suites, Victoria Island, Lagos, with the theme: “Spring Forth, Stand Out.”

Meaning: “As it pains them, we are enjoying it.”

The First Lady, who joined the conference virtually, urged women to get their Permanent Voter Cards and mobilise for greater participation in governance and the economy, saying their PVCs remain the greatest avenue to political leadership in Nigeria.

According to her: “The theme of this conference is a wake-up call to all women, especially in politics and governance.

“Women need to unite and shine more especially in this political dispensation.

“As women, we need to improve our worth and capacity to lead; we should study and strategies to assure Nigeria and Nigerians that women have the capacity to participate in politics and elect our leaders for greater development.

“We can only raise our voices by registering and collecting our voters’ cards.

“Our card is our voice to leadership in Nigeria.

“We must mobilize and strategies more for greater participation in governance and the economy.

“As mothers of the nation, let us unite to elect leaders with vision and mission and demonstrated commitment to a better Nigeria.

“I am convinced that the voice of the women will be heard loud and clear in the 2023 political season.”

Hajia Buhari encouraged women and youth to observe the tenets of democracy by shying away from violence and criminal act, just as she called for an end to harmful cultural practices whereby women and girls are prevented from benefiting from their father’s inheritance when they die.

She said: “We thank God for having some Governors that are sensible and considerate considering women to have a voice in the society.

“The eradication of such harmful cultural practices is worth emulating throughout Nigeria.”

She commended COWLSO under the leadership of Lagos State First Lady, Dr. Ibijoke Sanwo-Olu, for institutionalising the annual conference as a platform for the development of women and their participation in governance and the economy, saying the initiative of COWLSO was a clear pointer to the unique strength and character of the Lagos women.

She equally commended Governor Sanwo-Olu and the South West Governors for making it possible for women to have a voice and sense of belonging and participation in governance and the political process.

In her opening remarks, COWLSO Chairman and Lagos State First Lady, Dr. Ibijoke Sanwo-Olu, said the conference had earned the status of an annual event with the objective of inspiring ideas and robust intellectual conversations on issues affecting women and girls, and also men and boys.

Dr. Sanwo-Olu said the proceeds realised from last year’s edition were channeled to undertake a number of projects in line with the founding vision of COWLSO to complement the efforts of the state government in bringing about exponential development and growth and generally improving the welfare of Lagosians.

She said it was gratifying that the project has been completed and that it was designed to have a ground floor and two floors, and the first public school with a ramp specially designed for physically challenged students to facilitate ease of their movement.

“Other facilities are three laboratories for Physics, Chemistry and Biology, 10 Classrooms, Staff Rooms, Principal’s Office, Library, Sick Bay, an ICT Centre, Modern Toilets, and other sets of toilets specifically designed for students with special needs, among others,” she said.

She added that the COWLSO Orphanage Committee visited 10 Orphanage Homes, two per division in Ikeja, Badagry, Ikorodu, Lagos and Epe Divisions of the State, and supported with various items and equipment to take care of the children in their care and caregivers, thereby restoring hope to the vulnerable and indigent children in the homes.

She said: “The COWLSO Schools Committee, having done a needs assessment during their visits to schools in the state and earmarked 12 schools for renovation; 2 per education district, in partnership with the Special Committee on Rehabilitation of Public Schools (SCRPS). Out of the 12 selected, 2 have now been completely renovated. They are Gbenupo Nursery and Primary School Badagry and Akarakumo Primary School, Topo, Badagry. Some schools were already scheduled under the SUBEB and SCRPSS for renovation, having highlighted their immediate needs.”

So far, the First Lady said 1,161 market men and women have been trained through the special seminar organized across the state by COWLSO in partnership with the Ministry of Local Government and Community Affairs on Sanitation, Security and safety, while 51 COWLSO members benefited from the first batch of Agric value chain training, with others scheduled to be trained in subsequent batches.

On his part, Wike, who was the Special Guest of honour, commended the massive infrastructural development and other humanitarian projects embarked upon by COWLSO to support women and children, saying such would be replicated in his state.

He also donated N300 million to support COWLSO to deepen interventions aimed at complementing the efforts of the state government.

The COWLSO National Women Conference is an annual conference that is attended across Nigeria and beyond.

About 3,000 women are participating in the conference both physically and virtually in the next three days.

At the opening ceremony, the inspirational woman of the year award was presented to Adenike Oyetunde-Lawal for her passion in driving conversations around the plight of the disabled in Nigeria.