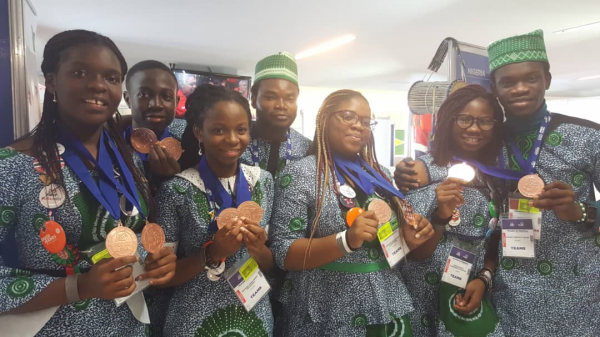 Nigerian teenagers, who raised the country’s flag at the 2018 First Global Robotics Olympiad in Mexico, have won two bronze medals at the competition participated by 187 countries.
The Nigerian team won the medals in the Outstanding Support and International Journey categories.
There were 20 categories of awards at the event which ended on Sunday.
The competition began on August 13.
The challenge was on Energy Impact. Competitors were to solve problems related to energy with the use of robotics.
Remi Willoughby, National Coordinator of the GRO, told NAN on telephone from Mexico that there were 193 teams from 187 countries at the competition.
Willoughby described Nigeria’s victory as an attestation that the Nigeria child was making progress in Science Technology Engineering and Mathematics.
The News Agency of Nigeria reports that the five teenagers, aged from 15 years to 17 years, are from secondary schools in Lagos.
They are four females and a male.
They are: Anjolaoluwa Olowokere from Lagoon School; Iroaganachi Udodirim, Queens College; Samuel Mbah, Osezele Comprehensive Senior Secondary School; Tochukwu Anyigbo, Lagoon School; and Daberechi Onyeacholem, Greensprings School Lekki.
Faisal Jarmakani, Managing Director, Aramex and Doculand Nig., sponsors of the team, had at a press conference in Lagos to announce the competition, said that the teenagers were building the foundation blocks for a technology-advanced Nigeria.
Jarmakani added: “Without any doubts, we will soon join other countries of the world where science and technology have become the backbone of economic development.”