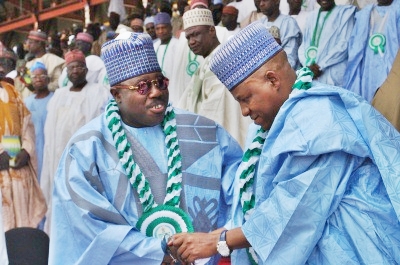 The former Governor of Borno State, Senator Ali Modu Sheriff, on Friday met with the Borno State Governor, Alhaji Kashim Shettima, at the Borno State Government House, Maiduguri.
The meeting, the first in so many years of feud, saw the political father and his political son meeting in the presence of thousands of their supporters.
This is also coming amid reports that Sheriff was planning to join the All Progressives Congress, the party to which Shettima’s All Nigeria Peoples Party fused into along with three others.
Sheriff had sojourned into the Peoples Democratic Party as National Chairman before he was edged out for the emergence of Prince Uche Secondus.
The discussion at the meeting between Sheriff and Shettima, held at the multi-purpose hall of the Government House, was not made public.
The APC will be holding its Ward Congresses across the 36 states and Abuja on Saturday (today), except in Adamawa State, where it has been postponed till Sunday.