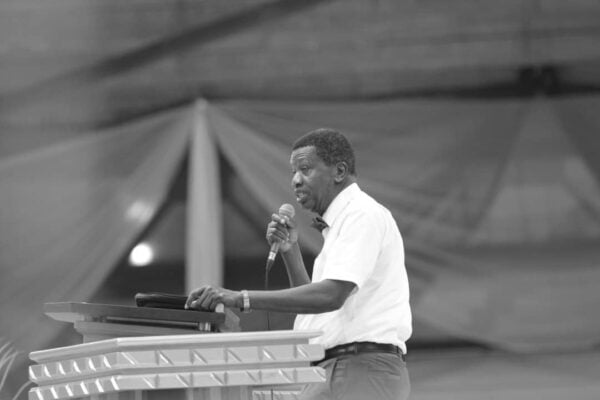 Believing in the word of God, Pastor Enoch Adeboye and his wife, Folu, defied doctors’ advice to have their last two children.
The General Overseer of the Redeemed Christian Church of God made the revelation in his presentation on the efficacy of faith during the October 2019 Holy Ghost Service, conducted largely by youth and young adults of the church at its Redemption Camp.
He said: “Before we became ‘Born Again’, we had our children by caesarian operation, so we stopped.
“Then we became born again, and one day we were studying the Bible when we came to Luke 1:37: ‘For with God nothing shall be impossible.’
“I told my wife we were going to have another but it would be God and God alone, who will handle the matter.
“Expectedly, physicians and friends advised us against it. Doctors said because my wife had been operated upon three times, if she tried to have another baby, something would rupture and both herself and the baby will die.
“But I said, that is not written in the Bible. What is written in the Bible is that: ‘For with God nothing shall be impossible!’
“Well, my wife was determined. She said ‘it’s either God does it or I will go and meet Him in Glory.’
“God did it and so there was no problem. They had said it could only happen if the baby was extremely small but the baby came and he was very big.
“But then the Doctors said: ‘Well, you know nothing is proved scientifically unless it is repeated.’
“So, God repeated it. And this time, He gave us a baby that was bigger than the first one.”
Like the Adeboyes, during testimony time at the church’s services, excited couples, who have had children through God’s intervention, shared their experiences. So many are such couples that testimonies of child birth seem to be assuming a routine exercise.

The Sermon
In the sermon with the theme: “His Power and Glory,” Pastor Adeboye said there are two kinds of faith: Power faith and Glory faith
Power faith, he explained, is dynamic, aggressive, active; could be violent and cannot be stopped.
“Like the faith of the woman with the issue of blood, who broke through a crowd to touch the hem of Jesus’ garment for healing. It is active.
“Another example is the faith of friends who broke the roof of a house Jesus was in to let down a paralytic for healing.”
The General Overseer said Glory faith is in the category of love, joy and peace; it is submissive.
“Faith which says no matter how bad a situation looks, we serve a God who is able to deliver us: Like the faith of Shadrach, Meshach and Abednego, who told Nebuchadnezzar: ‘If it be so, our God whom we serve is able to deliver us from the burning fiery furnace, and he will deliver us out of thine hand….’
“The kind of faith that says your live is in God’s hands; and may His will be done.”
Adeboye added that it is faith that enables one to go sleep even during a storm like Jesus did when the boat he was travelling in with some of his disciples was hit by a strong storm that made the disciples panic.
He cited his experience during a cruise years ago: “The first time I traveled on a cruise, there was a storm and everything was terribly violent.
“The whole sky was dark, the ocean was throwing the ship up like a toy. The Captain called everybody together and said: ‘Don’t worry, there are 12 categories of storm.
‘Category 1 being the smallest; category 12 the highest. Don’t worry, we are only in Category 10.’
“And I was saying to myself, Oh God, what am I doing here? What am I doing on an ocean? The Captain told everybody to go to their rooms and refuse to worry.
“But I was, so I asked the Lord what I should do. And He asked me what He did in a similar storm situation when he was in a boat with his disciples. ‘They said you were sleeping,’ I replied.
“Then He said I should go to sleep. And I did.”
Each time I tell this story, people ask me whether I really slept.
“Oh, as soon as He said ‘Sleep!’ I jumped on my bed; within a minute I was far gone. When I woke up, we were already at the Port – everything was quiet!
“What else would I have done? Jump out? I don’t even know how to swim. That is the kind of Faith that says my life is in the hands of the Almighty God that is not going to fail.”
Pastor Adeboye recalled that four times God said: “The Just shall live by faith,” to show how important it is to have faith in Him.
“For without faith it is impossible to please God.”
He stressed the need for both kinds of faith: “You can have both! You can have the POWER Faith and you can have the GLORY Faith. All you need to do is to tap into them.”

The youth preachers
Earlier, youths representing various zones of the church had taken turn to preach on the same theme to the large congregation. Pastor Adeboye praised them for their “beautiful presentations.”
“I am amazed and very pleased,” he said.
He was particular about the lady among them: “And then came this little girl. Oh, Glory be to God. When I saw her going to the pulpit, I was wondering why her zone picked her, only to discover that great miracles come in little packages.
“Oh, mine! That was amazing. After she finished preaching, we could easily have gone home. We were blessed; I was seriously blessed.”