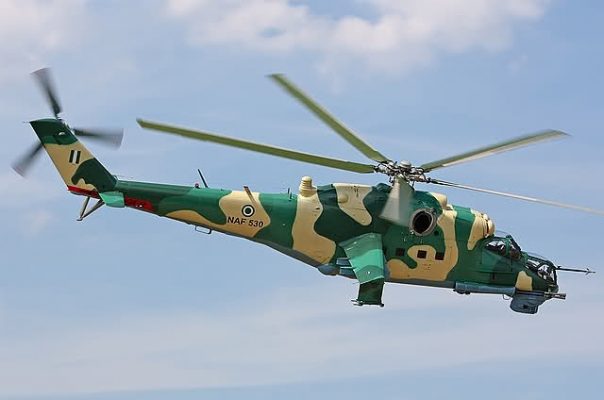 The Nigerian Air Force has responded with heavy airstrikes directed at Boko Haram terrorists’ locations and vehicles after about 100 soldiers were killed in a coordinated attack on a military base in Metele village of Guzamala Local Government Area, Borno State.
A top military intelligence officer told PRNigeria that the latest airstrikes had destroyed a convoy of vehicles linked to Boko Haram attackers involved in last week’s raid on the military base.
The Boko Haram attackers had used rocket-propelled grenades, machine guns and AK47 rifles in raiding the military base where armoured vehicles were destroyed and a number of officers and men of the Nigerian Army killed.
“The Nigerian air force is following the trail of the terrorists and has successfully destroyed about seven vehicles including gun truck and eliminated all the terrorists in the vehicles,” the military source said.
The source added: “The air force deployed the Mi-35M, multi-role combat helicopters which delivers a more superior flight performance with high-precision weaponry in destroying ground targets.
“Meanwhile, the aircraft also crossed the border into a neighbouring country in hot pursuit, where terrorists and stolen armoured vehicles were destroyed.
“The airstrikes took place in Tumbun Rego, Kangarwa and Mainok.
“There were also similar attacks hours after the Sunday’s attack.
“We expect the Nigerian Air Force to release air strike footage soon.”
Meanwhile, indications have also emerged that most of the Boko Haram commanders and their foot soldiers who attacked the military base were none-Nigerians.
Another intelligence officer told PRNigeria in confidence that the attackers were speaking Arabic, French and some foreign languages.
The officer said: “Some of our soldiers who escaped after the rescue operation told us that the attackers dressed in military camouflage similar to the one worn by member countries of Multi-National Joint Task Force.
“We learned that the attackers were not Nigerians as they spoke in Arabic, French and other strange languages when they first appeared like friendly force before they started to shoot at Nigerian troops.
“There is heightened suspicion that the deadliest attacks could not have taken place without collaborators probably within the military camp or the host community who could have been communicating with the terrorists before and after they stormed the locations.
“The military may likely engage in a tactical manoeuvre for forceful reinforcements of ground troops and air components in the affected areas in view of new developments.”