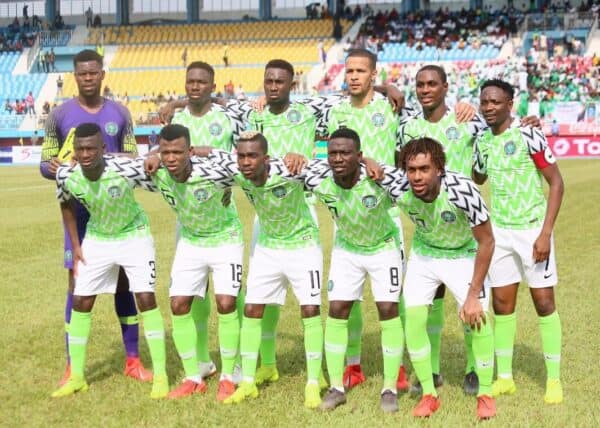 The former coach of the Golden Eaglets, Godwin Izilein, has described the current Super Eagles as a team for the future.
The coach stated this when he spoke with News Agency of Nigeria in Benin on Thursday.
He was reacting to Super Eagles victory over Bafana Bafana of South Africa at the ongoing Africa Cup of Nations in Egypt.
The coach who said the team have improved tremendously in their last two matches, noted that all they needed now was a little more time to blend more and understand themselves as a unit.
He said: “This present crop of players are the team for the future, if we can keep them for the next two years, Nigerians will smile for it.
“From their last two games, you can see that they have improved progressively.”
On the match against South Africa, Izilein noted that although the team played well,  their attitude of relaxing after taking the lead caused them goal scored by the Bafana Bafana.
He said: “It was a good game and I do hope the coaching crew will continue with the present players. The changes made by the coach also counted for the team.
“The question is, why do we always relax after scoring a goal?
“I had expected that we will keep pressure on the South Africans after the goal.
“That goal scored by them could have been avoided if we had kept the pressure on them.”
The coach who expressed optimism on the Eagles hitting the finals, said they need to be more tactical at this stage of the tournament.
NAN reports that the Super Eagles, on Wednesday night, defeated the hard fighting South Africans 2-1 to book a semifinal ticket at the ongoing AFCON.
Buoyed by an inspirational victory over hosts, Egypt, in their previous game South Africa gave a spirited fight against the more experienced Eagles which had also eliminated defending champions, Cameroon, before the crunchy quarter final.