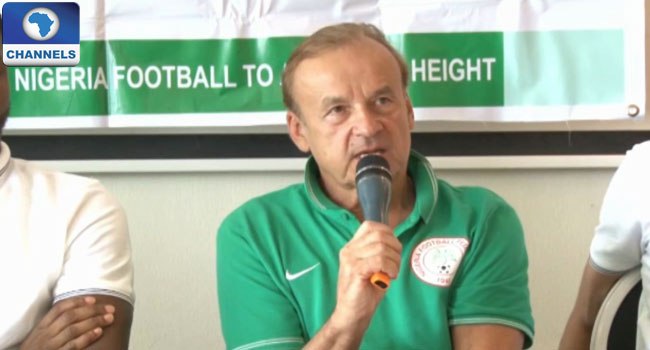 Super Eagles coach, Gernot Rohr, says Nigeria’s national team is not favourites to lift the AFCON 2019 tournament which kicks off on June 21 in Egypt.
Rohr made the disclosure at a pre-match news conference in Asaba ahead of the Nigeria/Seychelles AFCON qualifier on Friday billed for Stephen Keshi Stadium, Asaba.
The News Agency of Nigeria reports that Rohr was responding to a comment credited to Moroccan national team coach, Herve Renard, who tipped Nigeria and Senegal as favourites to lift AFCON 2019.
Rohr said though the Super Eagles have improved since their outing at the last World Cup in Russia, a lot of work still need to be done.
He said: “We have to work, we have young players in the team, most of them new in the team.
“It is not easy to go to a major tournament and win, most especially when we don’t have a player playing in the champions league.
“However, we have a big chance to go far at AFCON in Egypt, because since the last World Cup, I see the team has improved.
“So, I am very optimistic that we will do very well and challenge for the cup, but the main favourites are Egypt and Morocco.
“Morroco are currently number one in Africa going by the latest FIFA ranking. Also, Egypt will be playing at home, with a large home crowd behind them.”
On his expectations from the Sychelles game, the German-French soccer tactician said he expects the Super Eagles to defeat the Pirates of Seychelles.
He said the game against Seychelles is a very important game for the Super Eagles, most especially as they want to top the group.
He said: “We want to have the highest goalscorer in the AFCON qualifier, we also want to top the group.
“So, the match against Seychelles is very important to us.”