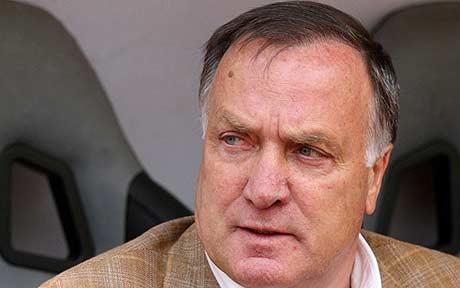 The veteran Dutch manager was quickly appointed until the end of the season following this week’s sacking of Gus Poyet, with the club 17th in the table.

The writing was on the wall for Poyet even before half time of their humiliating home thrashing by relegation rivals Aston Villa last weekend, which saw them leapfrogged by their opponents and drop to within a point of the bottom three.

Four goals conceded prior to the break prompted a mass walkout at the Stadium of Light and Poyet appeared resigned to the chop from that moment on.

Perhaps less predictable was his choice of successor.

His four-year spell in charge of Rangers from 1998-2002, in which he won the Scottish domestic double and treble in successive years, is the longest that he has ever spent in one job, and so this seems to be a quick fix for Sunderland.

Ironically, Hammers boss, Sam Allardyce, is the man being tipped to consolidate the Black Cats in the Premier League over the long term, although the 60-year-old has cooled speculation linking him with the club.

He looks increasingly likely to be available in the summer, though, with a seven-game winless run having put pay to West Ham’s European hopes and with it the possibility that Allardyce could be handed a contract extension.

A 3-0 defeat to London rivals Arsenal last weekend was a third in a row for the Iron and left them 10th in the table, 18 points behind a third-placed Gunners side which they led by one after the Boxing Day fixtures.

Injury problems at either end of the field have contributed to West Ham’s downfall. Both defenders James Tomkins and Winston Reid remain sidelined and so Cheikhou Kouyate will be asked to fill in at centre-back.

Carl Jenkinson is available again after missing the clash with his parent club, and Enner Valencia also hopes to be back in contention after a freak toe injury which saw him cut his foot on a piece of broken glass at home.

Possibly Advocaat’s biggest decision for his maiden game in charge is whether to include Adam Johnson in his squad. The winger returned to training this week after the club lifted his suspension following his arrest on suspicion of sexual activity with a 15-year-old girl.

Legal and internal investigations are ongoing and, while the former England international is officially available, reports are claiming that Advocaat will go down a different route and gamble on untried youngster Duncan Watmore.

The 21-year-old has yet to feature in the league since joining from Altrincham in 2013 and only featured intermittently on loan at Hibernian last season, but could be thrown in at the deep end of Sunderland’s survival bid.

Aside from sacrificing a midfielder to include Watmore on the flank, Advocaat could name an unchanged team if Steven Fletcher passes a late fitness test. Lee Cattermole is still suspended and Emanuele Giaccherini injured.