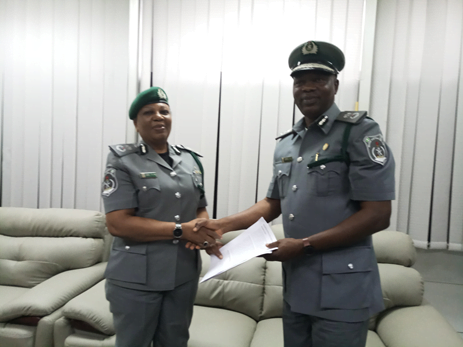 The News Agency of Nigeria reports that Adeniyi took over from Dr Jayne Shoboiki, who was comptroller of Murtala Muhammed Airport Area Command before MMIA was carved out of the command.

Speaking during the handover ceremony at MMIA, Ikeja, Lagos state, Shoboiki, explained that the command was split into two following the restructuring of additional eight commands that were created out of the existing ones.

She said that the NCS Board at its 50th regular meeting on May 21, 2019, approved the un-bundling and created of eight Custom Area Commands to enhance administrative convenience and boost revenue generation of the service.

Shoboiki said that this was part of the mandate of the Comptroller-General of Customs, Retired Col. Hameed Ali, to enable the service generate more revenue for government.

“I am glad to introduce to you the seasoned officer, Comptroller Wale Adeniyi now in charge of MMIA.  I beg you all to give him more cooperation you have given me to enable him succeed.

“The same God that has been seeing me through will surely support him, God will help him to excel.

“Coming here as an Area Controller because this command was not initially created as an area command; it will enable the command to generate more revenue for the government and Nigeria Customs being the second largest  revenue generating agencies for government to ensure that maximum revenue is collected for government.”

She, however, called on port users to improve on their level of compliance to enable customs achieve it aims to generate revenue and facilitate trade.

In his response, Adeniyi commended the Customs under the leadership of Ali for giving him the opportunity to head the  command.

He said: “I want to count on the understanding of all of you and guidance of all of you together to tackle all these challenges and make this place better than I met it.

“We need to, of course, realise the objectives of the management in splitting the command into two.

“It is going to be a lot of work and I am sure we are all ready to work. It is now time for us to work because we have to put that work first before any other consideration.

“My office will be opened to all of you. I will be looking forward to your suggestions, proposal because we are practically going to set up this command.

“I can assure you it is going to be fun working with me but also be a lot of hard work because we really have to work very hard.”

He commended Shoboiki for the foundation work she had established, saying that  it was a long time he visited the command and I could see some level of sanity that was not existing before which was due to the kind of structure she puts in place.

Adeniyi urged her to continue to support the command until it would be able to stand like the existing commands in the service.