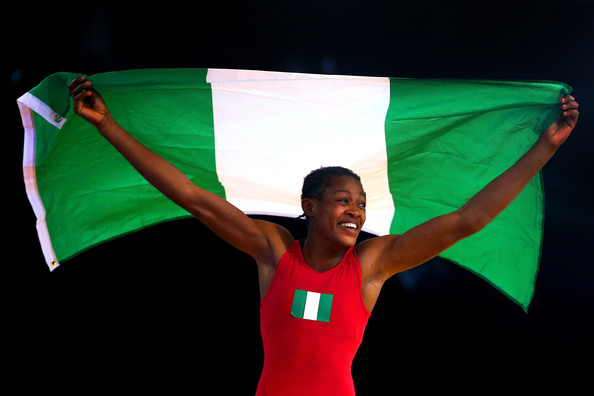 Nigeria’s Odunayo Adekuoroye was on Sunday crowned the best female wrestler at the 2019 African Senior Wrestling Championships in Hammamet, Tunisia.
The News Agency of Nigeria reports that the championships, which is a qualifier for the World Championships in Kazakhstan in September, began on Monday and ended on Sunday.
Adekuoroye was named the best female wrestler after her impressive showing on her way to successfully defending the gold medal she won in Port Harcourt, Rivers State in 2018.
As hosts in 2018, Nigeria paraded 90 athletes at the tournament in Port Harcourt, featuring a wrestler in all the weight classes at the cadet, junior and senior levels.
The 2017 world silver medalist and back-to-back Commonwealth champion made light work of her Cameroonian opponent Esoombe Tiako
She won their 57kg final in just 29 seconds via pinfall to record her fifth African title.
On her way to the final, Adekuoroye overpowered Jeannette Sambou of Senegal 4-0 via pinfall, before taking out Chaimaa Aouissi of Algeria 12-0 via technical superiority to move into the semi-finals.
In the last four, she also recorded another superiority win, outclassing home favourite Dorssaf Gharssi 10-0.
The 25-year-old’s award crowned a great day for Team Nigeria who emerged overall winners of women’s wrestling at the championships with five gold, two silver and two bronze medals.
A delightful Adekuoroye later took to her Twitter handle to express her joy at the victory.
“#2019ASWC. It could only be God! Thank [email protected]#TeamNigeria,” she tweeted.
Other Nigerian women winners at the tournament were Hannah Reuben (72kg) and Aminat Adeniyi (62kg), with Rosemary Nweke (53kg) and Ifeoma Nwoye (59kg) accounting for the two bronze medals.
In the men’s championship, Emmanuel Nworie in the 72kg category lost his African title as he settled for a bronze medal after beating Tunisia’s Lamjed Maafi 10-9 in the third-place match.
Overall, Team Nigeria won the women’s championship with 195 points ahead of second-placed Tunisia with 177 points, while Egypt finished third with 160 points.
NAN also reports that this marks the third year in a row that Nigeria is winning the women’s title at the African Wrestling Championships.
NAN.