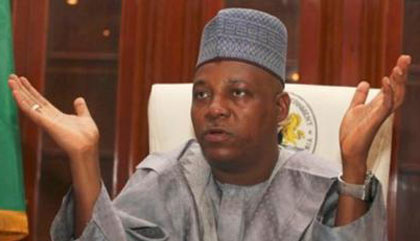 Ten Governors from four political parties: the Action Congress of Nigeria, the All Nigeria Peoples Party, the All Progressive Grand Alliance and the Congress for Progressive Change have thrown their weights behind the proposed merger of opposition political parties in Nigeria.
The governors who made their position known at a meeting in Lagos on Tuesday included Alhaji Kashim Shettima (Borno), Dr. Kayode Fayemi (Ekiti), Owelle Rochas Okorocha(Imo), Babatunde Raji Fashola (Lagos), Alhaji Tanko Almakura (Nassarawa); Senator Ibikunle Amosun (Ogun) and Rauf Aregbesola (Osun).
Others were Senator Abiola Ajimobi (Oyo); Alhaji Ibrahim Geidam (Yobe), represented by Senator Jejere Alkali; and Alhaji Abdulazeez Yari (Zamfara).
Reading the communiqué after a meeting on the merger, Shettima said the 10 governors, having reviewed the situation of the country, expressed concern at the worrisome state and resolved that the rescue of Nigeria is a task that must be done.
The governor said his colleagues have endorsed the merger initiatives already begun by their various political parties and would continue to give support to the action.
“Nigeria is greater than all of us and we have a duty to make it work for our people and the future of our children yet unborn,” he stated.
Also speaking, Fayemi said the merger was aimed at rescuing the country from bad governance, even as the governors have resolved to work in patriotism and serve the people of Nigeria.
Fayemi added that the representation from the different political parties and geopolitical zones is a proof that the merger plan is aimed at nothing but rescuing the future of the country and the citizens.
In his remarks, Okorocha debunked allegations that his party was not involved in the merger process.
He said that he and his party were very much committed to the progress and development of Nigeria.
Jejere said the merger will end the reign of the Peoples Democratic Party in 2015 and put the country in the right perspective.
He stressed that the PDP had not served the country and its people properly since 1999 when it came to power.
He assured Nigerians that the opposition parties have all that is required to serve the people and put the country on the right footing.
Fashola disclosed that other state governors would soon join the merger bid, just as he said that some were unavoidably absent from the meeting.