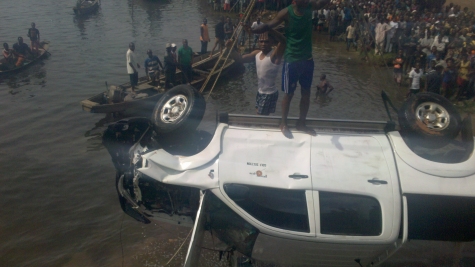 The Kaduna Sector Command of the Federal Road Safety Corps has confirmed the death of three persons and declared 14 others missing after an 18-seater bus plunged into River Rijana on the Kaduna-Abuja road.
The Sector’s Head of Operations, Salisus Galadunci, said the accident occurred around 11pm on Tuesday.
Galadunci told newsmen on Wednesday in Kaduna that the 18 persons, who were from one family, were returning to Lokoja from Kano when the accident occurred.
According to him, only one person survived the accident, adding that three bodies were recovered from the river.
Galadunci said: “An 18-seater bus travelling to Lokoja from Kano plunged into River Rijana with about 18 persons, all related, returning from Sallah break.
“The incident was reported by the only survivor, a woman, who manage to report to an FRSC ambulance stationed at Doka unit, along Kaduna-Abuja expressway, around 7am on Wednesday.
“Rescuers from FRSC Doka, Katari and Kakau were immediately dispatched with ambulances, and with support of local divers to search for survivors.
“Eventually, only three bodies were recovered, while the remaining persons could not be found, including the survivor’s daughter.”
Galandunci further said that the survivor explained that the accident happened in a flash and attributed it to over speeding and fatigue.
The road marshal said that the recovered bodies have been buried by the river side by villagers, as efforts continue to rescue the 14 missing persons.
Galadunci noted: “Among the FRSC rescue team were the Zone 1 Commander, Bulus Darwang, Kaduan State Sector Commander, Francis Udoma, and Zone 1 Head of Operations, Yomi Asaniyan.”