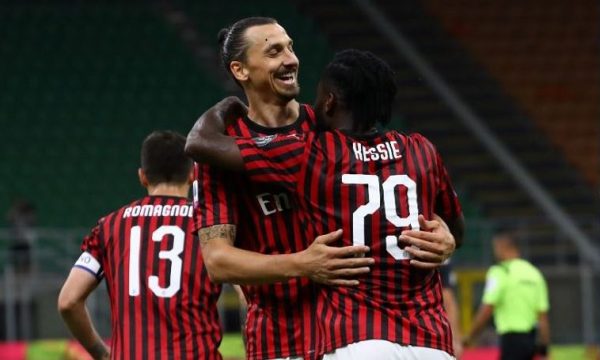 AC Milan produced another comeback act as they scored three times after the break to beat Parma 3-1 in Serie A on Wednesday and remain undefeated since the season resumed.

Franck Kessie began the fightback with a ferocious strike before Alessio Romagnoli and Hakan Calhanoglu struck to make it five wins and two draws in seven games for Stefano Pioli’s side.

Jasmin Kurtic had given Parma a half-time lead.

AC Milan stayed seventh with 53 points, which will be enough to qualify for the Europa League.

But this will be only if Napoli, who are sixth and have booked their place by winning the Coppa Italia, finish in the top six.

Pioli appears to have moulded one of the most impressive AC Milan sides in recent years.

But he is set to make way at the end of the season, with one year left on his contract, for German Ralf Rangnick, according to widespread media reports.

AC Milan have come from behind in their last four games, including from two down to beat leaders Juventus 4-2 last week.

The match came to life just before half-time when Parma forward Gervinho powered through the AC Milan midfield but, with several opponents closing in, fired over the bar.

Gervinho then released Alberto Grassi on the right and he pulled the ball back to Kurtic who met it first time and drove it past Gianluigi Donnarumma to give Parma a 44th minute lead.

AC Milan hit back 10 minutes after the break when Kessie collected the ball, took a couple of strides and nonchalantly unleashed a 25-metre shot that flew past Luigi Sepe.

Four minutes later, Calhanoglu floated a free-kick into the area and Romagnoli got free of the Parma defence and scored with a powerful downward header.

Calhanoglu continued his impressive form by firing the third in the 77th minute and veteran Zlatan Ibrahimovic almost got in on the act when he went close from a Kessie cross.