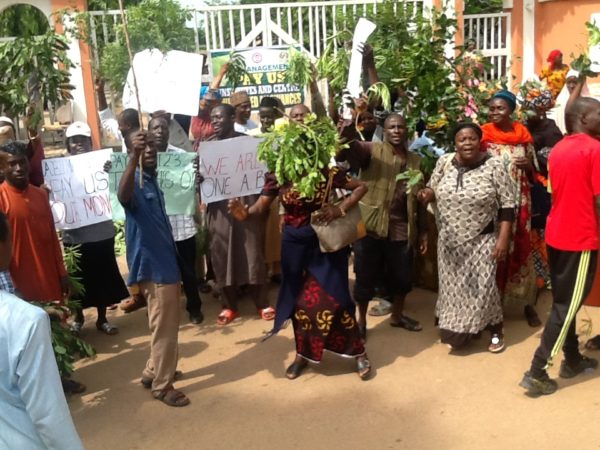 The Joint non-academic staff unions of Ahmadu Bello University, Zaria on Wednesday begun a three-day peaceful protest to press home their demand for payment of earned allowances.
The News Agency of Nigeria reports that the unions include National Association of Academic Technologists, Non Academic Staff Union and Senior Staff Association of Nigerian Universities.
NAN also reports that the joint unions are unions under research institutes in ABU such as Institute for Agricultural Research and National Agricultural Extension Research and Liaisons Services.
Others are National Animal Production and Research Institute and Centre for Energy Research and Training.
Addressing newsmen shortly after the protest, an elder from NAAT, IAR, Samuel Ogbonnaya, said the unions had been struggling for the past seven years to be treated as part of ABU.
Ogbonnaya said: “We have been struggling to be recognised as part of the university, we have written to Abuja and anywhere you can think of, that our management should pay us our well deserved earned allowance.
“This problem affects all the research institutes and centres under ABU.
“NAAT belongs to academic department of the university and all other in-house unions are also staff under the university.
“As members of NAAT, we take part in all the academic activities of the university, no student passes from Faculty of Agric, Faculty of Engineering without inputs of these staff from the institutes and centres.”
Ogbonnaya recalled that the unions collectively fought for the payment of earned allowances by the Federal Government, but lamented that when government paid the money, the management said non-academic staff under research institutes and centres were not part of the university.
He said: “Each time money for earned allowance came, the management will tell us that we are not part of the university, they will pay the staff of the university in the main campus and leave us behind.
“We have non-teaching staff, our colleagues who are ASUU members, who also belong to IAR and other research institutes and centres who have been paid first, second, third and fourth installment.
“But we the non-teaching staff are yet to be paid.
“We even had a meeting with the Vie-Chancellor where they said we should be paid but when money came they will say we are not part of it again.
“Obafemi Awolowo University is another university that is having similar issue with us.
“They also have a research institute attached to the university but they have paid their own staff their earned allowance.
“But ABU is still dribbling us.
“We have written volumes of letters to the V-C, to Directors of different research institutes and centres but to no avail.”
On his part, Sunday Egwere, unit representative, NAERLS, said the essence of the protest was to tell the management that the joint unions were not orphans, adding: “What is good for the goose is also good for gander.”
Egwere said the joint unions were fully aware that the money for the payment of earned allowances was a special intervention from government, adding that it was not coming through any budget line.
He said: “Because, one of the reasons the management offered was that our salary comes from a different ministry but we are sure that the earned allowance money comes from government intervention.
“The first one, the N30 billion, was from Tertiary Education Trust Fund.
“This has nothing to do with budgeted line.
“Therefore, we are appealing to our V-C and other management staff to please pay us.
“As you can see, we are very peaceful, we have only one NAAT, one NASU and one SSANU in ABU and we have sought for permission from them before embarking on this protest.”
Also contributing, Malam Mohammed Abdul from NAPRI, appealed to the management of ABU to do the needful to enable their members enjoy the earned allowance just like other staff of the university.
Abdul said the three-day protest would continue until the management listens to their plea and calls them to dialogue, adding that failure to do so, the joint unions would go back to the drawing board and deliberate on the next line of action.
The News Agency of Nigeria reports that all the gates leading to the research institutes and centres in IAR, NAERLS, NAPRI and CERT were under lock and key.
When contacted, Malam Auwal Umar, Deputy Director, ABU Public Affairs Department, said after consultations, the management resolved that the Directors of the institutes should respond to the allegations.
Speaking on behalf of other Directors, the Director, NAERLS, Prof. Mohammed Khalid-Othman, advised the unions to resort to dialogue with the management towards proffering a lasting solution to the lingering problem.
Khalid-Othman explained that their grievances had been discussed at series of meetings with the management of the university, adding that they were being briefed on every stage of the meeting.
He said: “The earned allowance is being paid by government not the institutes and it is the government that gives regulations on how it should be paid.
“If there is any omission or any problem, we have to go back to government and say there is this omission or there is this problem and let them address it.
“By and large, the unions have not been patient enough to really sit down with us and address the issue.”