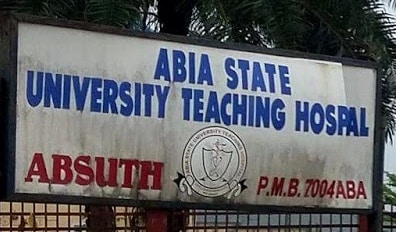 The Abia State University Teaching Hospital has written Governor Okezie IkpeaABSUTH zu, refusing to waive 14 months salary arrears to receive the new minimum wage.
The letter, dated January 14, signed by the Joint Action Committee Secretary, Samuel Kalu, and Chairman, Inyama Sylvanus, was made available to the News Agency of Nigeria on Tuesday in Aba.
NAN reports that ABSUTH workers, Abia Polytechnic and College of Education Technical, Arochukwu had not been paid over 10 months salary.
The hospital wrote the letter following alleged information from the unions that Ikpeazu had directed the Abia State Ministry of Finance and Accountant General’s office to prepare January salary with minimum wage scale waiving the old debts.
The letter reads: “Arising from a general congress of ABSUTH Joint Unions, held on Tuesday, Jan. 14, 2020, the staff unanimously and vehemently refused to skip arrears of salaries to receive the new minimum wage of N30, 000.
“It can be recalled that the government owes workers 14 months arrears of salaries, from November 2018 to December 2019.
“There is no how we will accept to be paid January 2020 in the guise of the new minimum wage.
“However, when these backlogs of salaries are cleared, we will be happy to key into the consequential adjustment of the N30, 000 new minimum wage.”
The unions addressed the letter to the Governor, and copied the Head of Service, Chief of Staff and his Deputy, ABSUTH’s CMD, NLC, TUC, security official and others.
The letter said that failure in settling the arrears negates Ikpeazu’s promise to pay the backlog, which the workers agreed to before suspending the seven months strike on June 17, 2019.
The letter said if the government refused to pay the backlog, the union might return to strike.
It urged the Governor to form a new policy to pay old and new salaries.
The telephone of John Okeiyi-Kalu, Abia State Commissioner for Information, remained switched off as attempt to get government’s side failed.
When contacted on phone, the Finance Commissioner, Dr. Aham Uko, said he was in a meeting, but asked that a text be sent.
Uko, however, did not reply the text message sent to him.