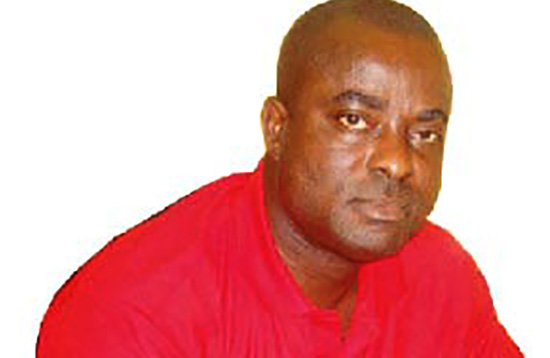 Policemen from the Abia State Command on Friday stormed the Surulere, Lagos State residence of Ebere Wabara, The Sun Associate Editor and Special Assistant (Media) to Dr. Uzor Orji Kalu, and whisked him away.
The incident happened between 6.30am and 7am in the presence of Wabara’s wife and underaged children.
The invading police from the State Criminal Investigating Department, Umuahia, had identified themselves to Wabara and told him that some unnamed persons had written a petition against him in Abia State.
He was, therefore, asked to follow them to the state, where he would be charged with sedition.
First, Wabara was taken to Sholoki Police Station in Aguda, Surulere, and later to Oyingbo Police Station, also in Lagos.
Speaking on how the abduction drama unfolded, Adanna Wabara, a mother of two kids aged eight and six years, said between 6.30am and 7am, her husband had gone downstairs to take something from his car.
“Shortly after, I heard him shouting, and I ran downstairs. I saw between seven and eight men, who said they were policemen. They said he needed to follow them to Umuahia, that there was a petition against him for sedition.
“They took us back into the house, one of them brought out an ID Card, showing that he was a policeman. They requested to search our bedroom. They did, and collected my husband’s laptop and telephone.
“I followed as they took him to Sholoki Police Station, but later, I had to take the children to school. By the time I returned, they had moved him away. His phones could not be reached and he had not eaten. Now, we are deeply traumatized, the entire family.”
A statement signed by the Managing Director/Editor-in-Chief of The Sun Publishing Limited, Femi Adesina, said the media house “sees the abduction of Mr Wabara obviously on the orders of the Abia State Commissioner of Police, Mr Adamu Ibrahim, and perhaps under the further instruction of the state governor, Chief T. A. Orji, as a throwback to the dark days of military dictatorship, when might was right, and the strong trampled on the weak.”
Adesina added: “It is unconscionable, repressive and flies in the face of all that is decent and civil. It has all the trappings of autocracy, rather than democracy. If Mr Wabara infringed any law, we would have expected the police to invite him to answer questions, and then charge him to court. The approach that has been adopted is Gestapo-like, and unbecoming of those who instigated it.
“Those entrusted with the upholding of the law are not expected to trample on others. This is what the policemen from Abia State have done, and it runs contrary to the code of conduct for policemen as espoused by the Inspector-General of Police, Mohammed Dikko Abubakar.
“When The Sun contacted the Force Public Relations Officer, CSP Frank Mba, he made quality efforts to resolve the matter, urging that Wabara’s statement be taken in Lagos, and that he be given the opportunity to thereafter report in Umuahia. But apparently, the invaders from Abia State had another design, obviously to keep him in detention over the weekend. It is simply despicable.”

Reps to collaborate with ICPC in tackling IFFs, corruption