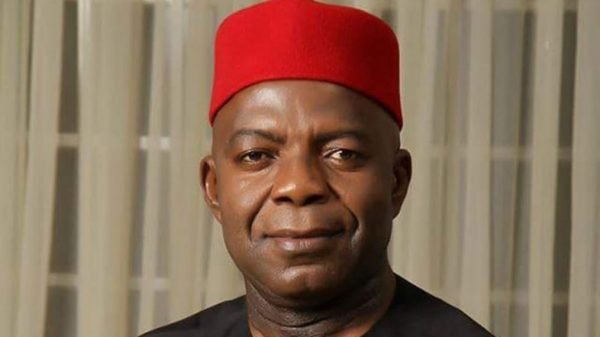 He also inaugurated his Campaign Council, with ex-House of Representatives member, Chief Nnanna Ngwu, as Chairman.

In a speech at the event in Umuahia on Tuesday, the governorship hopeful said that Emetu satisfied his desire for a youth as running mate.

According to him, the choice is to give the Abia youths a sense of belonging in the political space.

Otti also said that he got attracted to Emetu because of his antecedent as a philanthropist.

He said: “He is renowned in his Ohafia Local Government Area for his outstanding community development service and humanitarian gestures.

“So in all, he fits squarely into the characteristic and quality of the kind of deputy that I yearned for.”

Speaking also on the Campaign Council, he said that the team was constituted to drive a robust and result-oriented campaign that would ensure victory for the party.

In an acceptance speech, Emetu thanked Otti for finding him worthy for such an exalted position.

He said: “This opportunity is not only for me but for millions of Abia youths.

“You have made us to believe that the future truly belongs to the youth.”

He promised to mobilise the youths for their collective victory at the polls, adding that they would not betray the confidence reposed in them.

Also, the chairman of the campaign council promised that the team would leave no stone unturned to ensure victory for the party.

He appealed to members of the council to be committed to the project and shun divisive tendencies, such as gossips and backbiting.

The State Field Coordinator of the campaign and former House of Representatives member, Chief Acho Obioma, described Otti as “a good product that sells itself”.

Obioma said that the former Managing Director/Chief Executive Officer of the defunct Diamond Bank “is loved and admired by the people”.

In a remark, the Methodist Archbishop of Umuahia Diocese, Most Rev. Chibuzo Opoko, said he was satisfied with the high political consciousness sweeping through the country ahead of the General Elections.

Opoko, who was the Special Guest of Honour at the event, said that even clergymen could no longer afford to be apolitical at such a critical period in the nation’s political history.

“I am particularly happy over the active involvement of the nation’s youths to take back their country,” he said.

He said that all hands must be on deck to salvage Abia State and the country from economic retardation, widespread poverty, infrastructure deficit, unemployment and general insecurity.