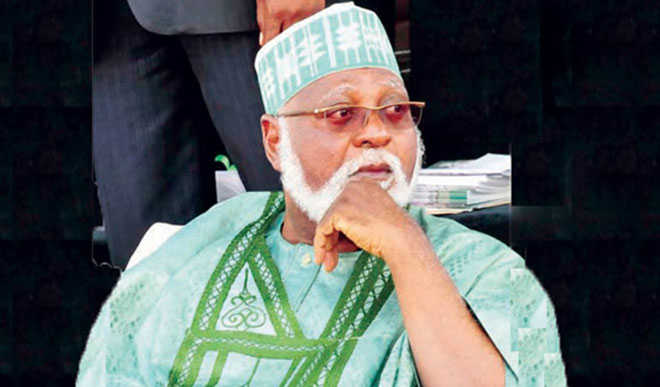 Former Head of State, General Abdullsalam Abubakar, on Tuesday urged all Nigerians to join hands to eradicate the menace of insecurity currently bedevilling the country.
Abubakar spoke at the Annual award dinner organised by Sir Ahmadu Bello Memorial Foundation in Kaduna, where he was the Special Guest of Honour.
He called on the younger generation and present leaders to ensure that the country witnesses development, progress, equity and justice.
He said: “We will always pray for peace and I am appealing to all Nigerians to put all hands on deck to eradicate this menace of insecurity currently threatening the peace of the country.
“We should try as much as possible to give information and intelligence reports to the security agencies for timely action.
“The late Sir Ahmadu Bello was all in all.
“He was a leader who ensured there was peace in the country and in northern Nigeria in particular.
“He was able to do this regardless of tribe or religious affiliations.
“He did what is right and carried everybody along.
“He ensured that there was development across board.”
Abubakar assured of continued support to the Foundation to enable it realise its vision of encouraging those in power to emulate late Sir Ahmadu Bello in actions and deeds.
Abubakar congratulated the awardees, saying they were all worthy to be honoured for their contributions to humanity.
Alhaji Babangida Aliyu, Chairman, Board of Trustees of the Foundation, said the awardees have contributed tremendously as individuals or through their organisations to the development of Northern Nigeria and Nigeria in general.
According to Aliyu, the awardees have demonstrated selfless services and uncommon achievements in their respective professional callings.
Justice Lami Abubakar, who responded on behalf of the awardees, said the award was a prestigious one and would spur them to do more.
The wife of General Abubakar said: “On behalf of all the awardees, I want to say a very big thank you and that we are humbled for counting us worthy and targeted for this great honour.”
The former First Lady charged the foundation not to relent on promoting the ideals of the late premier.
She said: “For me, I can report taking forward the Premier’s legacy from one to all with the support of imminent Nigerians.
“Through my organisation, the Women Right Advancement and Protection Alternative, we are working to impact on the lives of Nigerian women.”
She commended the leadership qualities of the late Premier, noting that he considered education as a cornerstone of his government and provided opportunity for every eligible child to be in school irrespective of any indices.
She said: “The purposeful vision is for a united and strong North as evidence in the vision of the late Premier, where he pursued human capital development through education, training and exposure of Northerners home and abroad.
“Today, the quest for unity remains an essential calling for the progress we all desire for the North and Nigeria in general.
“Inclusion and mutual respect for our diversities must therefore inform our efforts at achieving unity and progress.”
The News Agency of Nigeria reports that those honoured included former Head of State, General Yakubu Gowon, who bagged the Epitome of Leadership Award; and Justice Fati Abubakar, Award of Excellence in Public Service and Administration of Justice.
The posthumous awards went to late President Shehu Shagari, who was given the Exemplary Leadership Award, and late Chief Sunday Awoniyi, who bagged the Excellence and Service to Humanity, Unity and Progress of Northern Nigeria Award.