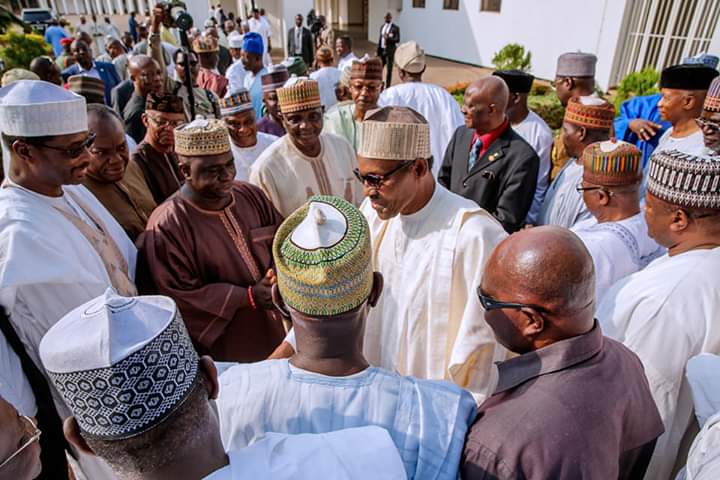 President Muhammadu Buhari on Monday got another critical endorsement from 71 retired military generals, who expressed their readiness to work tirelessly toward his re-election in the February 16 general elections.

The position of the generals led by retired Brig.-Gen. Buba Marwa, was made known when they paid a courtesy call on President Buhari at the State House, Abuja.

Marwa, who was military governor of Borno, and later military administrator of Lagos State, said the retired top officers thought it right to visit the President, “to say that you have represented your constituency very well”.

He said: “You announced a simple three-point agenda upon assumption of office namely security; fighting corruption, and the economy. You have kept your words as an officer and a gentleman.

“We the retired armed forces officers, representing 99.9% of our colleagues say that we are proud of you; proud to be associated with your administration; and proud to witness this era of Nigeria rising again under your able leadership.

“We support you fully and totally in the presidential elections next week and will do whatever we can within the law to contribute to your emergence as the victor in the election in order to take Nigeria to the next level.’’

The most senior of the retired officers, Vice Admiral Jubrila Ayinla, a former Chief of Naval Staff, said future generations would acquit President Buhari as the “most creditable” personality of his time.

He added: “Onbehalf of the generals here today, I congratulate you on the tremendous work done by this administration, and wish to state unequivocally that we are proud of you and fully behind you in the presidential elections next week.

“We pledge our full support and continued loyalty.”

Responding, President Buhari thanked the retired generals for their support and reiterated that he would continue to do his best in serving the nation.

He revealed that he contested elections four times and ended up in Supreme Court three times, before he finally won the election in 2015.

He said: “God has made this country great. We have human and material resources, and may God continue to give us the right leaders.

“My objective is very clear, and I will continue to do my best.’’
The president recalled what he said in his days as military head of state that; “We have no other country but Nigeria. We will stay here and salvage it together.”

President Buhari noted that even if one was blessed enough to send children for training abroad, “after such training, they will still have to come back here”.

He added: “We must, therefore, give our best for our country. The patriotism imbued in us by the military will ever remain relevant. Let’s do our best for this country.”

President Buhari, who described Nigeria as “a fabulous country”, said if it were not so, “the country could not have survived the damage done to it materially and morally in the past”.

He, therefore, glorified God that after 30 months civil war, with over two million lives lost, “we are still one country”.

He prayed that Nigeria would not lack people who could exploit its human and material resources, adding that, “the higher you go in Nigeria, the hotter it becomes, and not the other way round. But I can’t complain.

Buhari said: “I tried so hard to be here three times, ending up at the Supreme Court. So, I can’t complain over anything I am going through now.’’

He described the military as “an institution that gives amazing opportunities to know the country, its different peoples and cultures, and I am very grateful that you have claimed me back as one of your own.

He said: “I was governor of North-East, which is now six states, Minister of Petroleum for over three years, Head of State; I was arrested and detained, but did not lose my rank, because nothing was found against me.’’

The News Agency of Nigeria reports that the delegation of the retired army generals was made of one Vice Admiral, two Lt.-Generals, 15 Majors General and two Rear Admirals. 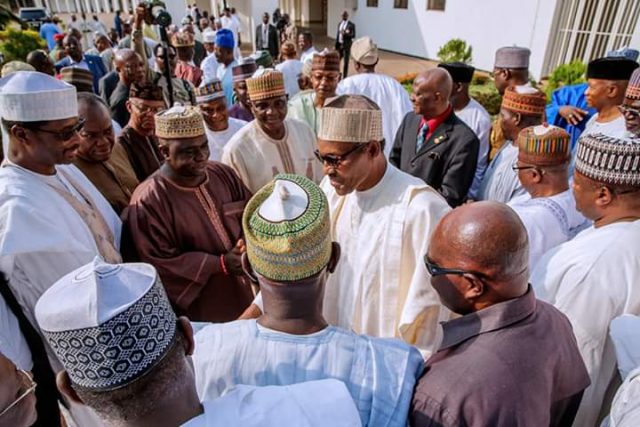