The 68 Chairmen of the Local Government Areas of Osun State are due to embark on a trip to the United Arab Emirates to study how Local Government Areas are administered in “Advanced Democracies Worldwide”.
A memo to that effect by the Local Government Affairs and Inspectorate Department of the Osun State Ministry of Local Government and Chieftaincy Affairs was cited by The Eagle Online on Sunday.
The memo, signed for the Coordinating Director of the Department, W.B. Ojulari, was dated May 31, 2019.
The LG bosses are expected to embark on the trip this June and will spend 10 days.
The memo, titled: “Sponsorship of Chairmen of Local Councils to a 10-day official trip to the United Arab Emirates, said all expenses except for the Duty Tour Allowance would be borne by the Osun State Government.
The All Progressives Congress presides over the state, with Gboyega Oyetola as Governor.
The memo, addressed to: All Chairmen/Executive Secretaries and Supervisors; and All Local Councils, reads: “I am directed to refer to the above subject and inform you of the approval of the State Government to enable Chairmen of the sixty-eight (68) Local Councils embark on an official trip to the United Arab Emirates in the month of June, 2019. The trip, which is being facilitated by ETCETERA INTERACTIONS LIMITED is to afford them the opportunities to be exposed and groomed in the International best practices in the area of Local Government Administration as it is being practiced in the Advanced Democracies Worldwide.
“I am to add that the approval given by the State Government covers the cost of visa, flight tickets, accommodation, feeding and local transportation, while each Local Council is expected to bear the cost of Duty Tour Allowances. This is to be calculated at the existing exchange rate using the extant Circular Ref. No. SMD 179/336 of April, 2011 on the various Duty/Travelling Allowance payable to Government functionaries in the State of Osun.
“I thank you.”
At creation on August 27, 1991, Osun State had 30 local government areas.
The immediate past Governor of the state, Rauf Aregbesola, created additional 38 Local Council Development Areas, Area Councils and Administrative Offices on March 8, 2016. 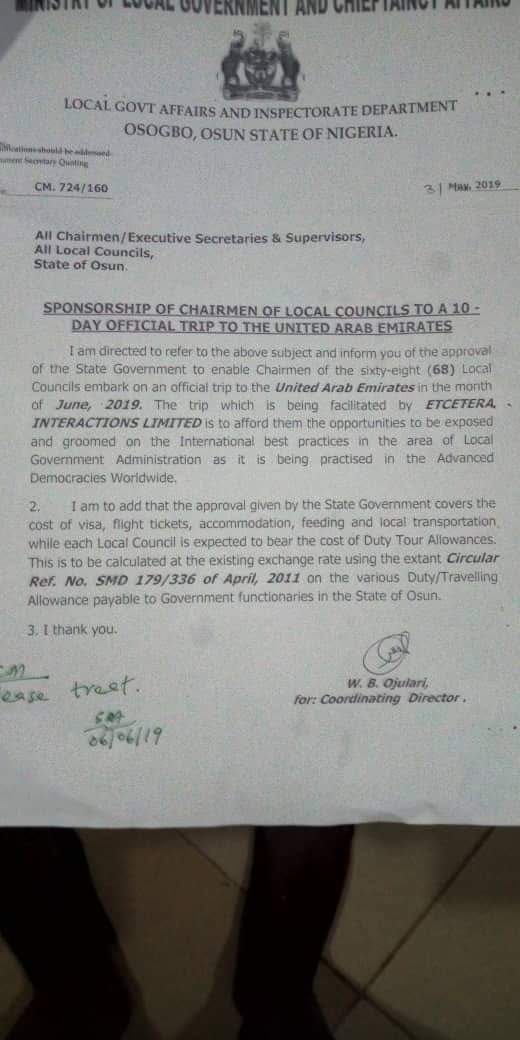