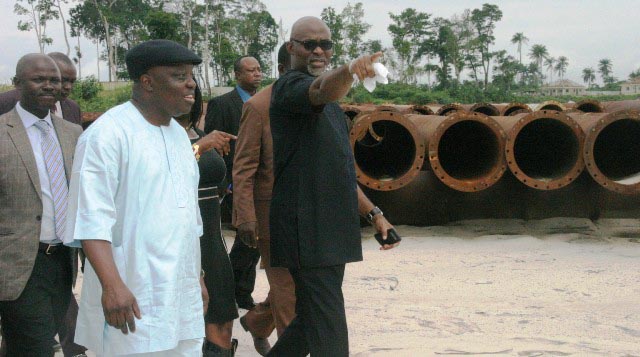 Young artistes have inundated the office of the Delta State Governor, Dr. Emmanuel Uduaghan, with requests for support based on the Talent Quest.
Most of the artistes were not able to earn from their creative products because they do not have visual.
And since the state’s Talent Quest Studio is a one-shop facility where talented youths begin and finish their music or movie projects, all roads now lead to the oil rich South-South state for lifeline.
The state Commissioner for Culture and Tourism, Barrister Richard Mofe-Damijo, popularly known as RMD, who spoke with The Eagle Online in Asaba, the state capital, after rendering the Mid-Term Scorecard of the state’s Directorate of Culture and Tourism, said: “The state’s Reality TV Show has become one of the most effective windows through which the outside world sees Delta State.”
According to Mofe-Damijo, the show as a public relations tool has effectively captured the creative energy and enterprising spirit of over 5,000 young artistes across the state and the Niger Delta region, thus mitigating negative media reports branding all Niger Delta youths as militants.
He explained that apart from the DTQ and DTQ Reality TV Show, the state’s Dream Alive Skill Laboratory has since 2009 provided immediate employment for youths who were trained in different aspects of the creative art.
This ranges from professional script writing to camera handling and editing.
The youths were given a one-stop starter pack after the training to enable them start earning a living immediately.
Mofe-Damijo said although the state’s entertainment industry was suffering from insufficient budgetary provisions for both capital and recurrent expenditures and time-bound activities, it has however during the period under review aggressively implemented a strategic physical development plan for its tourism sector.
He said: “The promotion of cultural heritage has been on the forefront of our achievements.
“This is with a view to opening new income streams for government as we strive towards a sustainable Delta Beyond Oil.”