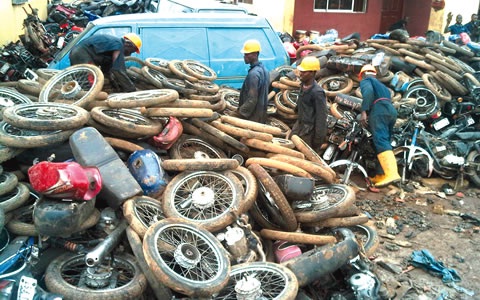 The renewed clampdown on commercial motorcyclists in Lagos State by the police is taking its toll on residents.
The renewed clampdown by the police is in line with the enforcement of the new traffic law in the state banning the commercial motorcyclists, popularly known as okada, from some roads.
Since the clampdown was intensified last week, residents who do not have their own vehicles but make use of the services of the commercial motorcyclists, now trek long distances to their destinations.
It was observed on Wednesday at the GRA area of Ikeja, the state capital, that stern looking police officers were arresting and impounding the motorcycles.
Residents were also seen at the PWD area and along major routes within the GRA trekking while others waited endlessly for tricycle operators.
In what can be considered a mixed blessing, what seems like a loss to the commercial motorcycle riders has become a blessing for the tricycle operators as those who patronise them have suddenly increased.
A passenger who requested anonymity, urged the Lagos State Government to consider the plight of the poor in the state.
The passenger said: “We know he (Governor Babatunde Raji Fashola) wants the best for the state but people are suffering.
“The cost of taking a taxi in Lagos is very expensive.
“The government should allow okada within the streets of GRA as not everybody has a car or can afford taxi.”
The renewed clamp down on motorcycles is also affecting police and other security officers who employ the use of their bike as a means of transportation.
The police officers were not spared as they stated that their colleagues in enforcing the new Lagos State traffic laws have been arresting officers as well.
A corporal attached to the police headquarters at Ikeja stated: “I was riding on my bike to work and in front of the Area F Police Station at Ikeja, I was stopped by other policemen.
“I identified myself as a policeman but they ignored me.
“I saw them fighting other policemen and seizing their bikes.
“I had to plead with the leader of the team but he said I have to park my bike somewhere as they have directive not to allow any motorcylces, whether those of officers or civilians ply within ikeja.
“I had to park my bike with a shop owner and trek to the command.
“The law should at least consider policemen because we use our bike to go to work and come back.”
When contacted, the Commissioner, Lagos State Police Command, Umar Manko, stated that the Lagos State traffic law is no respecter of persons.
Manko said: “As it is now, if I ride on a motorcycle, I will be arrested.
“That is what the law says and we are enforcing it to the latter.
“I know there are grey areas, which I can talk to the governor about, but for now, we are committed to enforcing the law and like I said I the Commissioner of Police can also be arrested if I ride okada in restricted areas.”
Last week, the Lagos State Task Force on the Environment and Special Offences Unit, announced that over 3,000 motorcycles were crushed by the Unit to serve as a deterrent to commercial motorcyclists who were arrested for plying restricted routes in the state.
Superintendent of Police Bayo Suliaman, the Chairman of the Task Force, said more impounded commercial motorcycles would be crushed.