Thirty Nigerian ladies trafficked to Lebanon but now stranded in the country have appealed to the Nigerian authorities to come to their rescue as a video of their predicament hit the social media.

The Journalists International Forum For Migration, through its President, Ajibola Abayomi, relayed the message after an exclusive encounter with the victims through a statement on Friday and called for speedy rescue action from the government.

Abayomi said beyond lamentations, JIFORM had forwarded details of the human trafficking agents involved in the matter to the relevant agencies and will diligently monitor it to the logical conclusion to ensure proper investigation and prosecution of all those involved.

The ladies, all camped in one room with faulty toilet and other utilities, are presently housed in a building in the city of Dawra in Lebanon.

Narrating their ordeal, one of the victims, who spoke on behalf others, Comfort Oluwatoyin Adebisi, with passport number A10597908, said they had to escape from inhumane treatment being meted to them by their mistresses and hosts.

The 23-year-old lady hails from Ondo State, graduated from Edo State Polytechnic, Ekpoma and was a resident in Osun State before departing Nigeria in December 2019.

Adebisi said: “We are dying here and we need urgent rescue attention from our Nigerian government.

“We are appealing to Hon. Abike-Dabiri Erewa, Pastor Enoch Adeboye of Redeemed Church, Prophet Genesis of Celestial Church, Apostle Suleiman, Prophet T.B. Joshua and other men of God for prayers and help.

“Help us plead with the Nigeria Immigration Service, National Agency for Prohibition of Trafficking in Persons and others to save us.

“The Nigerian Embassy in Lebanon has tried, but we want to go back home.

“Our stories are pathetic and regrettable.

“We were told by agents before we left Nigeria that we are going to be paid between N250,000 and N300,000 a month as teachers and house maids, but getting here we were subjected to sexual labour and other terrible jobs.

“Our belongings and international passports were seized with no payments for the service we have been rendering for months.

“They loosen and cut our hairs with razor blade.

“Every day, we are being beaten with constant harassments from the Lebanese police.

“Our employers cooked all sorts of stories against us by lying that we stole their gold, killed their children and manhandled their aged ones without any evidence.

“The police and their immigration are always on their side.

“We are not getting justice and our lives are in danger.

“At the moment many of us are sick and down with ulcer, tuberculosis and other illnesses and the hospitals here are not attending to us because we have no document to prove our status.

“It is really a crime to be a black in this world.

“We want to go back home and shall be contented with whatever rehabilitation scheme government can give us.”

Speaking from the United States of America, the Executive Director/Co-Founder of Rescue Africans In Slavery Organisation, Omotola Fawunmi, who has been responsible for the upkeeps of the ladies, pleaded with the government and other agencies to join the rescue mission.

Fawunmi said: “Over the years, we have been in involved in this.

“These ladies are really suffering.

“The Nigerian Government must act fast.

“Apart from this case, there are over 300 of them trapped in Oman and thousands across other Asian countries.

“Beyond sustaining the ladies, we have facilitated evacuation of thousands of human trafficking victims in last few years and also provided them with medical and series of rehabilitation supports.

“All of us must fight human trafficking to save our youths.”

Also worried about the development, the County Manager, The Migrant Project, Nigeria, Clare Henshaw, called for swift action to be taken by NAPTIP and Nigeria in Diaspora Commission.

Henshaw said: “First, we want the ladies to be rescued as soon as possible.

“Their condition is very critical because they don’t have good shelter, food and they need urgent medical attention.

“My personal conversation with Comfort showed that they were really in a bad state at the moment.

“After rescuing the ladies, there must be thorough investigation and punishment for the agents and other human traffickers involved in this.”

When contacted, the Nigeria Immigration Service, through its National Public Relations Officer, Deputy Comptroller James Sunday, said all hands were on deck to redeem the situation by working with the NIDCOM and other agencies.

According Sunday, the Nigerian Ambassador and the ladies in Lebanon had been contacted for necessary intervention as he cautioned the ladies to refrain from further posts on the social media for security reasons.

A statement issued on behalf of the NAPTIP Director General, Julie Okah-Donli, by the agency’s Press Officer, Vincent Adekoye, said: “The National Agency for the Prohibition of Trafficking in Persons is deeply concerned and shares the pains of the Nigerian girls who are stranded in Lebanon.

“It will be recalled that since May 2020, NAPTIP has, through the collaboration of the Ministry of Foreign Affairs, the ministry of humanitarian affairs Nigerians in Diaspora Commission and the EU -International Organisation for Migration joint initiative and the Nigerian Embassy in Lebanon repatriated more than 100 victims of forced labour from Lebanon.

“The Agency will work assiduously with all relevant authorities and partners to locate these girls and ensure that they return safely as soon as possible.

“NAPTIP reiterates its appeal to young Nigerians to beware of people dangling tempting jobs in foreign lands as fake labour agents who are traffickers deploy all kinds of tricks to lure their potential victims.” 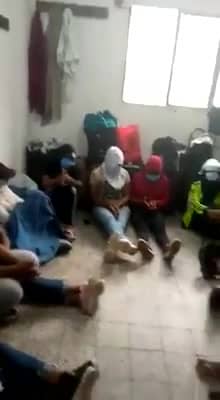 Hundreds of thousands of people leave Britain due to pandemic

UNILORIN gives update on its phased resumption of physical classes

Aregbesola to Alaafin on 50th coronation: You’ve conducted yourself with grace