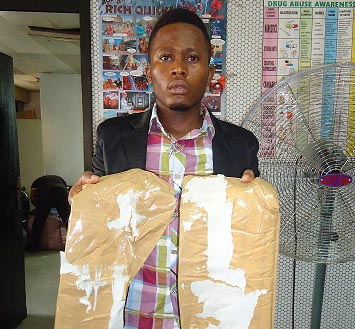 A 22-year-old Nigerian who lives in Thailand, Jude Ejikonye Ilechukwu, said that he invested N750,000 into drug trafficking.
Ilechukwu was apprehended with 1.295kg of substances found to be methamphetamine on his way to Thailand.
The drug, hidden inside his luggage, was detected during the screening of passengers on Ethiopian Airline flight at the Murtala Mohammed International Airport, Lagos.
The MMIA Commander of the National Drug Law Enforcement Agency, Hamza Umar, said the drug was carefully hidden in the suspects’ luggage.
Umar said: “Like several factory modes of drug concealment, we had to practically cut the bag open to detect the drugs.
“Ordinarily, when you open the bag, you will not see the drug.
“We found two brown parcels of drugs weighing 1.295kg.”
According to Ilechukwu, he was lured into the drug deal by a friend he met in Thailand.
In his words: “I am a business man.
“I relocated to Thailand last year where I buy goods and send to Nigeria.
“It was in Thailand that I met a man who introduced me into drug business.
“He gave my number to his partner in Lagos who lodged me in a hotel.
“They made me to contribute N750,000 as my contribution and promised me a handsome reward on arrival in Thailand.
“My focus was on the profit that will accrue to me.
“It was when I was arrested that I realised I had made a big mistake.”
Ilechukwu attended Okija Community Primary School and Okija Grammar School, Anambra State before he started business.
Similarly, a 36-year-old suspected drug trafficker, Akpata Martin Chukwudi, who was given $800 for ingesting 20 wraps of cocaine, has narrated his ordeal in the hands of his sponsors.
Chukwudi ingested the drug in Brazil and was apprehended at the Lagos Airport.
The suspect tested positive to drug ingestion during the inward screening of passengers on Qatar Airline flight.
While he was on observation, the suspect allegedly excreted 20 wraps of cocaine weighing 350 grammes.
The suspect during interrogation owned up to the crime, stating that if he had known, he would not have been involved in drug trafficking.
In his words: “I saw hell trying to ingest the drugs in Brazil.
“They brought about 100 wraps but I was only able to ingest 20.
“They were angry and disappointed but the more I force myself, the more difficult it was for me to swallow.
“Eventually, they gave me $800 in anger instead of $5,000.
“I actually decided to smuggle drugs because I needed money to settle my mother’s hospital bill.”
Chukwudi is single and hails from Olo in Enugu State.
He attended Central Primary School, Olo.
According Umar: “Investigation revealed that Akpata left Nigeria to Venezuela where he lived for several months before he relocated to Brazil since January 2012.
“He was apprehended at the arrival hall of the airport when he tested positive to drug ingestion.”
The Chairman/Chief Executive of NDLEA, Ahmadu Giade, said that the Agency will investigate all cases and bring drug culprits to justice.
Giade said: “The Agency is prepared to bring drug barons to justice.
“Our target is to reduce the drug problem to the barest minimum.”
The suspects will soon be charged to court.