2023: Why I stepped down for Bola Tinubu — Senator Amosun 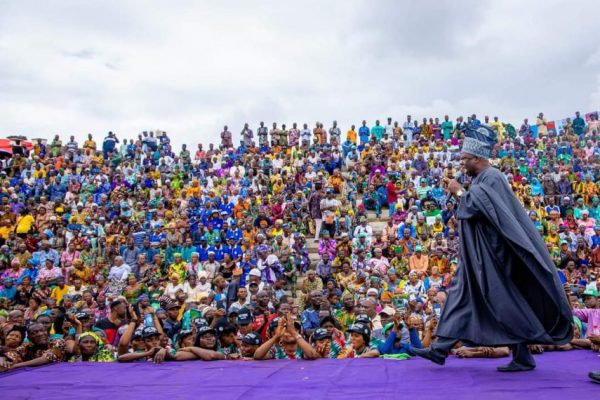 Former Governor Ibikunle Amosun of Ogun State on Thursday organised a political rally in Abeokuta to mobilise support for the presidential ambition of Asiwaju Bola Ahmed Tinubu, the National leader of the All Progressives Congress and its presidential candidate for the 2023 elections.

Tinubu emerged the candidate of the APC for the 2023 presidential election at the party’s primary in Abuja on June 8.

Amosun, who addressed a mammoth crowd at the Ake Palace in Abeokuta, said he organised the rally to motivate support for the election of Tinubu as Nigeria’s next president.

The former governor explained that he sacrificed his presidential ambition and supported Tinubu in the interest of the South West region in particular and the nation in general.

He said: “Our Yoruba elders had called us that if we really want the presidency to return to the South West region, we must look for a way to be united.

“I have also told my close associates about two years ago that I desired to be president  of the nation but that my ambition cannot supersede or override the general interest of the South West or the entire nation.”

Amosun noted that the Muhammadu Buhari-led administration had made tremendous achievements in repositioning the nation.

He, however, expressed concern that instead of focusing on the many great achievements of the administration, many people chose to concentrate on the issue of insecurity.

The former governor stated that the challenges facing Nigeria were not insurmountable.

Amosun, who eulogised the qualities of Tinubu, noted that he had the wherewithal to sustain the developmental stride of Buhari and also take the nation to enviable height.

He urged his supporters to extend their loyalty, support and prayers for him to Tinubu and the APC at large.

He said: “We do not have another country except Nigeria and I am sure Nigeria will be great.

“We all need to join hands and collaborate with and support Tinubu to succeed Buhari.

“Tinubu will still move around the entire country to campaign and he will definitely come to Ogun and visit places like Ilaro, Ijebu, Abeokuta and other places to solicit your support.

“Let us please support him to win the 2023 presidential election.”