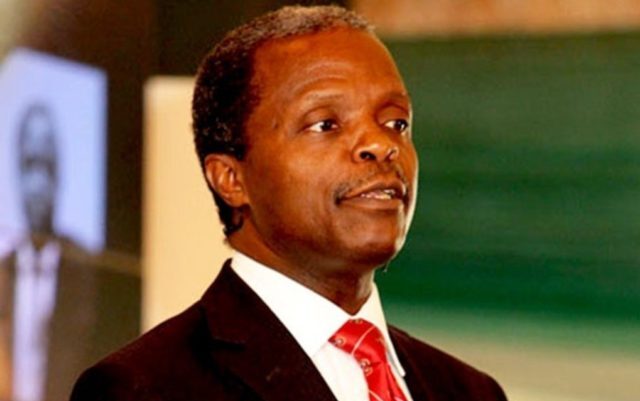 Vice President, Prof. Yemi Osinbajo, has shown that he is the ultimate devil’s incarnate and that shouldn’t be of any surprise to the global community. In the last seven years, the world has been watching him with uncanny sense of pity as the master mourner each time he joins his principal, President Muhammadu Buhari, to mourn the lives of the thousands of Nigerian masses, slaughtered by Fulani terrorists, herders and kidnappers, who are often buried in mass graves. Osinbajo’s unimaginable pretenses, his backstabbing character, poverty of politics, shambolic perversion of progressive principles of what restructuring and democracy should be, all amount to a very poor copy indeed.

Osinbajo, a Senior Advocate of Nigeria (SAN) and a Pastor of the Redeemed Christian Church of God (RCCG), shocked beleaguered Nigerians again yesterday when he shamelessly promised to govern, as President of Nigeria, in the same way that President Muhammadu Buhari has been governing the country! That singular statement should have ended his political career if the citizens were not beholden under the unyielding hold of a class of political lunatics who have deliberately enslaved them, through a sense of existence exercised by dolling out N10,000 (Ten Thousand Naira) just like Osinbajo does through Traders Monie each time election is around the corner to signpost Nigeria under Buhari as a failed nation and government.

“I have had the honour of serving under a transparent leader, President Muhammadu Buhari, who exposed me very diligently to all that there is to know about governing a complex and very diverse country such as ours.

“With the experience that God has given me and the exposure that I have had, including being acting President on occasions; if God enables me to become President of the Federal Republic of Nigeria, I think my experience, all I’ve learned, will be extremely useful.”

Nigerians would like to know which of the Buhari’s legacy upon which Prof Osinbajo says he’ll build his presidency on since Buhari’s administration has been tainted by heightened insecurity in the country as bandits, insurgents, unknown gunmen and criminals continue to kill, kidnap and wreak havoc across the country? Is it the Buhari’s government where Nigeria in 2018 displaced India to become the world’s poverty capital, according to a report by Brookings Institution, while rising inflation rates have sent prices of food and commodities through the roof, even as the CBN battles foreign exchange crisis that has left the naira at more than N600 to a dollar at Black market? Will Prof Osinbajo continue Buhari’s legacy in the area of employment, whereas the Buhari regime claims that it has lifted 10.5 million Nigerians out of poverty, the World Bank estimates that seven million Nigerians dropped below the poverty line due to worsening inflation in the country in 2020?

From the outset of President Muhammadu Buhari’s clannish Presidency, Prof Yemi Osinbajo has been one of the objectionable characters who took it upon himself woolly the faces and consciousness of Nigerians to forget the atrocities of an irredentist Buhari’s debased administration, having lost his own humanity himself. Each time Fulani terrorists kidnapped, raped, slaughtered Nigerians on their farms, Osinbajo will step in to say it’s ‘herders and farmers clash’, instead of calling it the proper name: invasion. The Christianity Osinbajo subscribes to says you must restitute if your cattle graze over your neighbour’s farmland. “If an animal is grazing in a field or vineyard and the owner lets it stray into someone else’s field to graze, then the animal’s owner must pay compensation from the best of his own grain or grapes” ( Exodus 22.5).

First was the Osinbajo’s concoction about ‘Restructuring’ – after his early halfhearted sermonization about it in the past when the shoes were in the other foot – and his current abnegation on ‘Restructuring’ after becoming Vice President. As Osinbajo mounts the rostrum from place to place, canvassing for the presidency, he has been shying away from the word ‘Restructuring’! The reason is clear: the stale restructuring gambit, the concept through which Nigerians were deceived into voting for the APC in 2015/2019 has faded.

Osinbajo’s Presidential declaration two months ago drips in the same barefaced falsehood, outright manipulation of facts and shameful exaltation of a fascist government, aided by the collapsed military and security architecture that has been hunting down tribes other than the Fulani terrorists that have helped to entrench Buhari’s northernization agenda.

For Yemi Osinbajo, power is a nemesis and it’s the reason he has been rubbing his nose in the sand as an unreconstructed heretical agent of restructuring and egalitarian governance. 2023 general election will teach and keep destructive politicians like Prof Yemi Osinbajo in check with the stirring revolt against the status quo that has brought in a worse version of the status quo through the back door of politics of realignment of strange bedfellows.

Ikhide writes from Lagos and can be reached via: [email protected]