2023: Osinbajo divides RCCG as Pastor calls for sack of colleague who campaigned for him 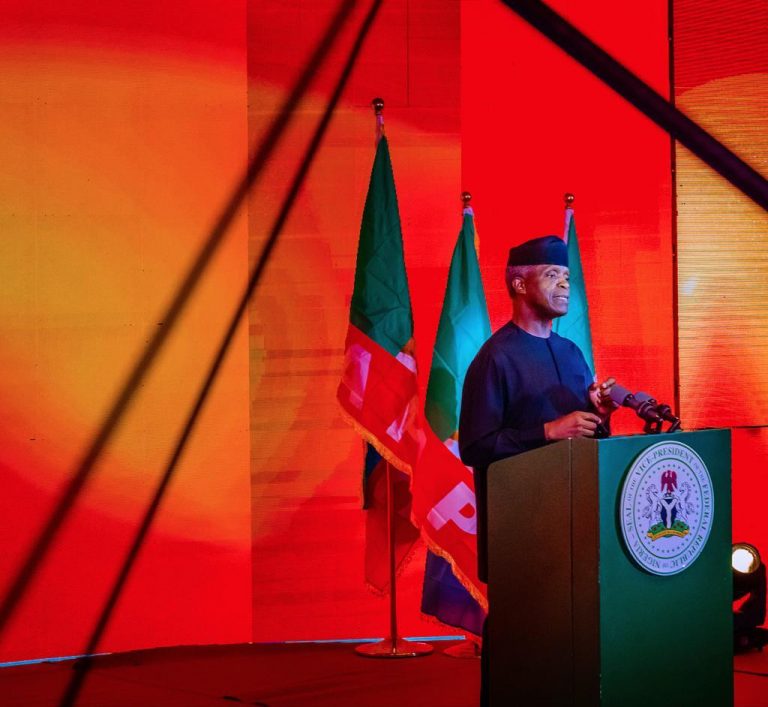 A Youth Pastor of the Redeemed Christian Church of God, Dr. Oche Otorkpa, has called on the leadership of the church to sack the Head of Politics and Governance, Pastor Timothy Olaniyan, who campaigned for the Vice President, Prof. Yemi Osinbajo (SAN) ahead of the 2023 elections.

It will be recalled that Olaniyan openly declared support for Osinbajo at a public event over the weekend.

He said Osinbajo, as a pastor with the RCCG, will fulfil his electoral promise.

But reacting to the comment bu Olaniyan, Otorkpa demanded for his sack.

He said in the statement: “I was saddened when my attention was drawn to the statement credited to the Head of Politics and Governance of the Redeemed Christian Church, RCCG, ‘Pastor’ Timothy Olaniyan. This act reminds me of the tragedy promoted by many of my colleagues in the Redeemed Christian Church of God, who used the RCCG altar to promote Buhari as the only savior of Nigeria because Osinbajo also a Redeemed Pastor, was his running mate.

“Against all admonition by our father the General Overseer, these pastors choose to ignore an express order and promoted Buhari/Osinbajo using the RCCG pulpit in 2015 and the results are what we see today.

“While I have nothing personal against Osinbajo and those campaigning for him, our father, the General Overseer has made it clear to everyone that the church is a congregation of all parties and all are his children.

“If truly the said ‘Pastor’ Timothy Olaniyan voiced such a one-sided opinion, then he should be ashamed of himself, and the many people who insulted Leke (Adeboye, the son of the General Overseer of the RCCG, Pastor Enoch Adejare Adeboye) for calling such people goats should apologize to him because this man’s action has not only ridiculed the mission but also the reputation of our father in the Lord.

“As one of those who fiercely defended the RCCG when concerned Nigerians labeled the newly created Politics and Governance directorate as an Osinbajo campaign arm of the church, I felt I owe it a duty as an ordained minister and someone who has spent close to 3 decades working to help achieve the church’s missionary objectives, to speak out.

“How can a Redeemed Pastor, saddled with the responsibility of promoting all, insist on a public forum that one person is the only child of God that could change the narrative of governance in Nigeria?

“This is someone who says he wants to consolidate Buhari’s legacies, a legacy characterized by banditry, kidnappings, massive killings, corruption, stealing and diversion of crude oil, unfulfilled promises, and borrowings that are about to throw us into a state of bankruptcy as a nation.

“Pastor Olaniyan claimed that politicians will promise heaven and earth, and at the end of the day, you see them giving N1000, N2000 to eligible voters. That was similar to what Osibanjo did the last time with Trader money prior to the elections, jumping from one market to the other.

“When it comes to failed promises, nobody beats Osinbajo and Buhari. They promised three million jobs per year, it is almost 8 years, and those who have jobs before they came to power are now jobless.

“Osinbajo and Buhari promised 20,000 MW of electricity within four years, but today, grid collapse and darkness are what Nigerians are battling.

“When Osinbajo and Buhari came to power on the 29th of May 2015, the naira was exchanged at N199 to the dollar. Today, the naira is exchanging at almost N600 when they promised to make it equal to the dollar.

“As I write this response, our youths and children are at home due to the ongoing ASUU strike, Osinbajo and Buhari had promised to give up to 20 percent of the national budget for the educational sector, they have never exceeded 6% since they took power. Even the foreign scholarship created by Jonathan for First Class students has been canceled by them.

“They promised to clean our electoral system but ended up creating devilish inventions such as the inconclusive elections and the ‘remote control’ in the words of Buhari which they used on the people of Osun state to deny Adeleke his last mandate and Nigerians in the last general elections.

“They promised to reduce the fuel pump price to N40 per liter, this year, the price ranges from 165 to infinity depending on where you are buying. Even diesel that was very available has now disappeared, thanks to the change championed by some of our Pastors.

“Proverbs 12:22 says the LORD detests lying lips, but he delights in people who are trustworthy. When a pastor begins to brand deceptive people as the only ones being capable of changing the narrative of governance in the country, then you know there is a problem.

“While Pastor Olaniyan has the constitutional right to hold a political opinion, he clearly does not understand the sensitive nature of the office he occupies and the diversity of the interest and the people he is meant to manage.

“We therefore humbly call on the church leadership as a matter of urgency to remove ‘Pastor’ Timothy Olaniyan as the Head of Politics and Governance, to enable the unit to discharge its mandate without shamefully taking sides and dancing naked in the market square.

“May God Help Us to Help Ourselves.”