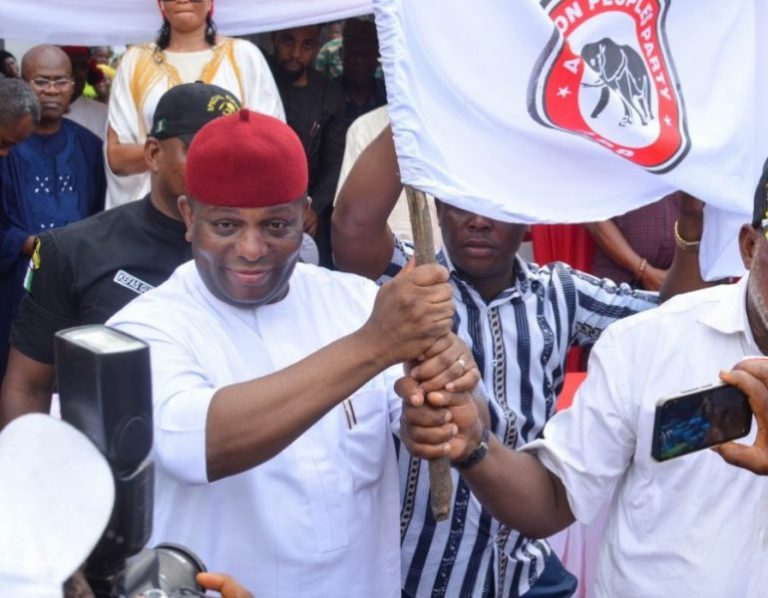 Mascot Kalu’s emergence at a well attended APP primary followed his adoption as consensus candidate of the party, shortly after withdrawal from the 2023 governorship race by a co-aspirant, Ndem Chukwu.

In his acceptance speech, the candidate who is younger of the Senate Chief Whip, Kalu said his bid to become Abia State’s Governor was necessitated by the alleged failure of the ruling People’s Democratic Party (PDP) to address myriads of problems impeding human, economic and Infrastructural growths and development of the state.

He frowned at the inability of the government to pay backlogs of salary arrears, gratuities, pensions and entitlements owed Abia workforce and the retirees, promising to clear the salaries  pensions every 25th of every month if elected as governor come 2023.

Kalu partly stated, “we say no to payment of school fees in primary and secondary school, our government will restore free Education, normal free healthcare delivery in the seventeen local government areas of Abia state, and as well, restore and enhance the security of lives and properties of every Abia citizens and residents. We will reel out our programs when campaigns starts”.

Earlier, while speaking on his withdrawal from the race, Chukwu explained that he was pleased with the ex-Abia Chief of Staff, having the mandate, urging his teeming supporters across the 17 local government areas of the state to rally round the APP gubernatorial flagbearer and other candidates on the platform of the party to win the 2023 general election to all elective political offices.