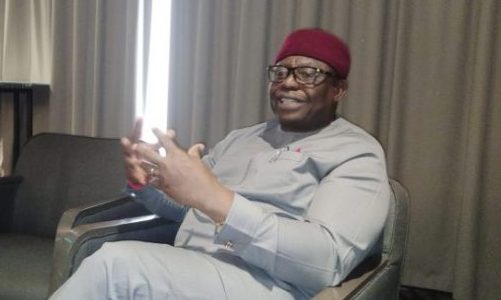 The Independent National Electoral Commission says it will shut down the ongoing nationwide Continuous Voter Registration Pre-Registration online portal in April in preparation for the 2023 general elections.

Festus Okoye, INEC National Commissioner in charge of Information and Voter Education, said this on Thursday.

Okoye spoke in an interview with the News Agency of Nigeria on Thursday in Lagos.

Okoye said: “We are going to shutdown the online portal latest by April but the physical registration will be going on until June.

“After June, the possibility of extending the CVR process is next to impossibility because we got to clean up the register, do claims and objections, and we have to print PVCs.

“People have to collect PVCs and we have to give every registered political party the voters register that will be used for the 2023 general election.

“The law has obligated us to stop everything relating to voter registration at a particularly point in time.”

Okoye said shutting down the portal had become imperative for INEC to clear those who had done their online pre-registration for the purpose of capturing their biometrics.

Okoye said the fourth and the final quarter of the ongoing CVR, billed to start on April 11, would be rounded off in June, urging Nigerians to do the needful at the right time, to avoid last minute rush.

He said the commission had seven services on the online registration portal for eligible voters as against six in previous registrations.

He added that the seventh allowed people to locate where their Permanent Voter Cards were domiciled.

For those who registered during the first, second and third quarters of the ongoing CVR, Okoye said the chairman of the commission will soon let them know the date and time when the new PVCs will be ready and the points of collection.

He said: “Some of these PVCs have already been printed and we want people to come and collect their PVCs.

“The fourth and the last quarter will end sometime in June.

“Now, we do not want a situation where people will begin to rush to register at the 11th hour to create a surge in our local government and state offices.

“We want people to approach the state or local government offices now and get registered.

“We have also devolved the CVR to the various registration areas/wards on rotational basis.

“We want people to go and register now.

“We do not want a situation where people will overwhelm our offices toward the end of June. People should seize the opportunity and do the needful at this point in time.”

According to him, Nigerians who made sacrifice to register for PVCs should make additional sacrifice to go to either the state of local government offices of INEC to individually pick them  up.

He said: “In a place like Lagos and in other states, we have so many PVCs that have remained uncollected from precious registrations and we want people to access these voter cards.

“There are millions of PVCs yet to be collected nationwide.

“In fact, in Lagos State we have over a million PVCs that have not been collected and this varies from state to state.

“We have millions of PVCs that have not been collected by those who registered since 2011 up till this time.”

According to him, after some time the commission will gather all the uncollected PVCs and deposit them in the Central Bank of Nigeria to ensure that those PVCs do not fall into wrong hands.

Okoye said one of the biggest challenges encountered in the ongoing CVR was that hundreds of Nigerians in diaspora who used the online pre-registration portal were yet to come back to the country to complete their biometric capturing physically.

He said the law stated that they must present themselves physically to complete the process to be eligible for the issuance of the PVCs to vote or to be voted for.

“So, those who started the online pre-registration and have not completed it, after sometime, it will lapse,” he added.

Okoye said the Nigerians who had moved from one place to another did not need to register afresh but only needed online transfer of details to their new state, local government, ward and polling unit for INEC to print new PVCs for them.

He said the same applied to those who had lost their PVCs and those whose PVCs were defaced.

The Commissioner, who urged Nigerians to know the power and value of their votes, advised them to be involved to make a difference in governance.