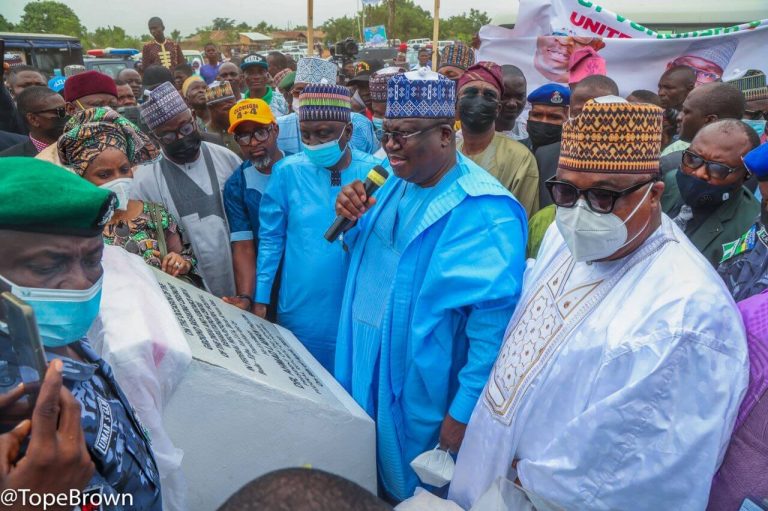 The President of the Senate, Ahmad Lawan, on Saturday advised the people of Kwara State not to allow those people that they chased out of the state Government House in 2019 find their way back to power.

The administration of the All Progressives Congress took over power in the state in 2019 from the Peoples Democratic Party.

The Senate President was in Ilorin, the capital city of Kwara State, to commission some of the Constituency projects sponsored by Senator Ibrahim Yahaya Oloriegbe, who is representing Kwara Central Senatorial District.

Lawan spoke at a town hall meeting organised by Senator Oloriegbe to account for his stewardship and also declare his intention to run again and represent his people in 2023.

The Senate president told the people of Kwara State in general to continue to keep faith with APC.

He said: “I will like to remind you here, those people that you chased out will never get tired of trying to come back.

“You have only one more of ‘Otoge’ and they will never come back.

“In 2023, just chase them far away from Kwara, and they will never find their way to Kwara.

“Don’t take it for granted.

“They are smart people.

“Chase them far away, if you can, up to the Atlantic Ocean if you chose to chase them to the South.

“If you wish, chase them up to Niger Republic.

“Chase them far away from here.

“The people of Kwara, you have gotten what you deserve from 2019.

“You have a state Governor that is for you.

“You have your National Assembly members that are for you.

“You have your state Assembly members that are for you and council chairmen and councillors.

“Don’t ever take that for granted.

“Less than three years, what our state Governor in Kwara has done, what our members of National Assembly, our Distinguished Senators, all the three of them, Senator Yahaya Oloriegbe from Kwara Central, Senator Sadiq Suleiman Umar of Kwara North, Senator Lola Ashiru of Kwara South, have given every time that they need to give for us in the Senate to achieve what we have been able to achieve in the Senate.

“You don’t need to think twice.

“Make the gap more than convincing.

“Don’t assume, well we have win in 2019, this people, send them far away from Kwara so that we can maintain the trajectory of what you have been able to get today because, Nigerians, having gone through 16 years of deprivation, of mis-governance between 1999 and 2015, deserve the progressives to continue to provide leadership in Nigeria.”

Speaking specifically on Senator Oloriegbe, the Senate president said the people of Kwara Central could not have had it better considering the achievements of the Senator within less than three years of his being in the Senate.

Lawan said: “What we watched, the 30 minutes documentary on the activities of Distinguished Senator Ibrahim Yahaya Oloriegbe, showed something more than three-year activities of a Senator.

“For you to achieve what you did in less than three years, it beats my imagination, how a new Senator, in three years, can attract so many projects, sponsored so many bills and engaged himself in so many activities within a short time.

“Imagine if you had him as your Senator in the Eight Assembly, so if you are talking of seven years down the line, probably we will be here until next day going through his achievements.”

The Senate president commended Oloriegbe for facilitating the idea of a rehabilitation center.

He said the idea of the center was “to show that the Federal government of Nigeria cares about our youths.

“That our President, Muhammadu Buhari, cares about our youths and their tomorrow.

“That the Distinguished Senator you voted for, the man representing you today in the Senate, Senator Ibrahim Yahaya Oloriegbe, cares.

“Today, it’s a fact, that across the country, we are challenged as a people, as a nation by substance and drug abuse.

“Some of our youths that fall victims need to be rehabilitated.

“But I want to take the opportunity here to appeal to all of us in the leadership positions at all levels of government, Federal, State and Local Government to ensure that we are proactive, that we make it difficult for drugs and substance to be available for them to be abused.

“But that is not what we want.

“That actually is not what we need.

“My prayer will be that after we construct this centre, there should be nobody inside it because nobody should be a victim.

“But we need to prepare for the worse at all times.”