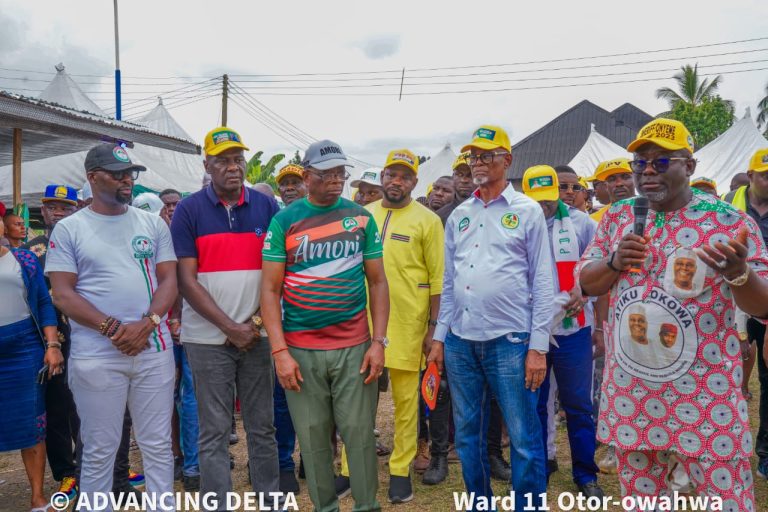 The Delta State PDP Governorship Candidate, Sheriff Oborevwori has described the seven and half years rule of the ruling  All Progressives Congress (APC) as hellish for Nigerians, saying the party must be voted out of power next year.

Oborevwori, also the Speaker Delta House of Assembly made the declaration during campaign Friday, in Wards 10, 11, 9, 8 and 7 of Ughelli South Local Government Area of the South South State, promising that opportunities are going to be created when elected as Governor in 2023 general elections for the unemployed to be taken out of the streets.

According to him, the unemployment being experienced was not caused by the Peoples Democratic Party (PDP), but by the APC.

“The APC has brought untold hardship to us in the last seven and half years. Things have really gone bad since APC took over power from the PDP and it is only the PDP that can repair what has been destroyed by the APC. PDP will take you people out of the streets and you know that this problem of unemployment everywhere is created by the APC and we must chase them away next year with our votes”, he said.

The governorship candidate said: “I will not fail with the MORE Agenda which is my social contract with Deltans. We are going to do everything possible for our victory next year. We are members of one political party and we will not miss the votes. I am here to harvest these votes and we are not going to allow internal crisis to affect us. Please, vote for all Candidates of the PDP. As far as we are concerned, there is no trouble here”.

“Our youths, women, and leaders are going to be happy as I am going to continue from where our hard-working Governor is going to stop next year. Our Governor, Senator, Dr. Ifeanyi Okowa who is the Vice-Presidential Candidate of the Peoples Democratic Party has done very well in the State.

The ruling party harvested some big wigs of the opposition APC during the Ward-to-Ward campaigns in Ughelli North and Ughelli South Local Government Areas of the State.

He specifically showered praises on Rt. Hon. Festus Ovie Agas, the Chief of Staff to the Delta State Government for facilitating his coming to the PDP.

The Retired Military officer expressed his gratitude to be identified with the PDP, describing it as a party of light, and promised to work with the leaders of the Ward to deliver 5/5 for PDP during the 2023 general elections.

On Thursday, December 1, 2022 at Ward 1, Agbarho, Bishop Linus Okhuemoi, the National President of the Christian Movement for Good Governance (CMGG) dumped the Accord Party with his team to join the PDP..

The Bishop revealed that he was instrumental to the victory of Hon. Ejiroghene Waive, the House of Representatives member representing Ughelli/Udu Federal Constituency during the 2019 National Assembly elections.

According to him, due to the bad leadership of the All Progressives Congress (APC) that has brought bad governance to the nation and having seen that PDP is the best political party that means well for the nation, they have decided to join the PDP to enthrone good governance come 2023.

At Jeremi Ward 2 in Otu-Jeremi, Ughelli South Local Government Area of the State, scores of persons defected from the APC and other political parties to join the PDP.

The defectors said that they were tired of the misrule of the APC, describing it as a drowning party whose life span will not be longer than 2023. The party in the State is being run by one man who has nothing to offer the people of Delta State.

“The few ones that came he hijacked them to his village at the detriment of other Local Government Areas, communities, associations, and other political pressure groups that worked for him in the Delta Central Senatorial District.

“We no longer want to follow the Deputy Senate President, Ovie Omo-Agege, a well-known serial saboteur who sees himself as a demigod. He hijacked the structure of the party to the detriment of many leaders. We are going to teach him a lesson he will never forget with our votes in 2023’’ said decampees.

The Delta State PDP Chairman, Olorogun Kingsley Esiso and the Delta Central Chairman of the party, Chief A. P. Fovie who received the decampees said that they made the right decision, assuring them that they would be accorded the rights and privileges being enjoyed by members of the party.