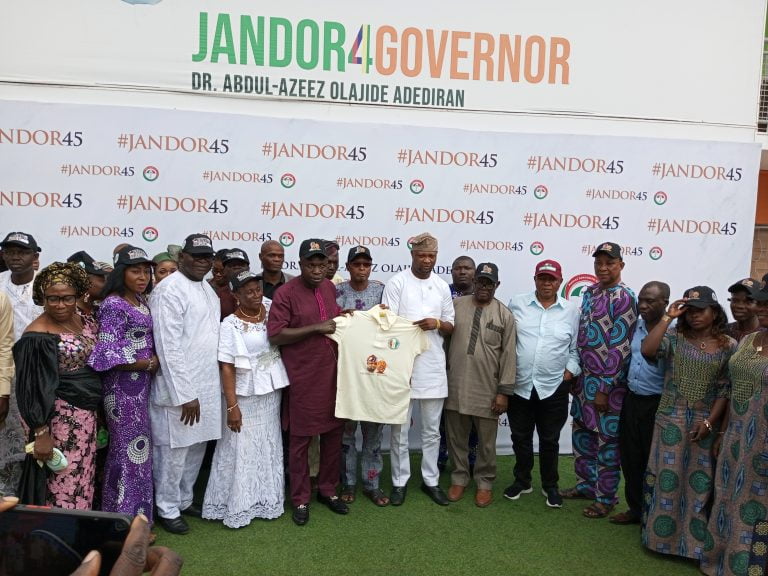 The Conference of Registered and Deregistered Political Parties in Lagos State has endorsed the governorship candidate of the Peoples Democratic Party for the 2023 elections, Dr. Abdul-Azeez Adediran, also known as Jandor, ahead of the 2023 general election.

The Chairman of the CPP in Lagos State, Dr. Akin Badmus, made the position of the body known at a ceremony.

He said the endorsement became imperative following the dearth of dividends of democracy in the state and the need to unite with the main opposition party to unseat the ruling All Progressives Congress.

Badmus, also the Lagos State Chairman of the Peoples Democratic Movement, said that the co-political group, spread across the 20 local governments and 37 local council development areas of the state, had resolved to throw their weights behind Adediran and the PDP presidential candidate, Alhaji Atiku Abubakar.

Badmus said: “Looking at the robust economy of Lagos State with highest internally generated revenue in Nigeria, the dividend of democracy in Lagos is nothing to write about to compare to her robust economy, population and revenue.

“It is a fact that cost of living in Lagos is very high with revenue that does not reflect in the development of Lagos State.”

He said the decision for adopting Adediran was based on his determination to rectify and eradicate the hardship being inflicted on Lagos residents.

He alleged that the unchecked excesses of motor touts in the sate had added to the plights and suffering of the residents, which the CPP believed Adediran would curb if supported and elected.

Badmus said that the endorsement was also based on their belief that Adediran would revive dilapidated infrastructure and commence new ones in the state if elected.

He said: “This is the time PDP is taking over.

“APC is no longer the choice of Lagos residents.

“We believe in the candidacy of Jandor who has been going all round Lagos, visiting ail the 245 wards for his electioneering campaign, a feat that has never been done by any politician in the history of Lagos.

“That is an evidence of a governorship candidate that truly wants to govern the people and make Lagos work.

“So today, the entire 30 political parties, comprises both registered and de-registered, and as such direct all our followers to begin massive campaign for the PDP in Lagos State.”

In his response, Adediran expressed appreciation for the confidence reposed in him and the party with his aspiration.

He said: “Coming here in the opposition camp shows that you truly mean business and you want to be part of the liberation of Lagos.

“Wholeheartedly, we want to welcome you, embrace you and from today onward, we have considered you as crucial part of this struggle and together we are going to birth that breath of fresh air in Lagos.”

Adediran said his campaign tour had visited about 98 wards of the 245 wards in the state in the last one month, adding that his grassroots engagements had revealed to him the plights of residents and infrastructure decay.

He said that his campaign strategy had shown that his team believed in hard work and that only hard work would get the party what it wanted.

Also, Niyi Adams, Head, Campaign and Strategies, Jandor/Funke Campaign Organisation, who appreciated the move by the CPP, described it as a pathway to free the state from those who held it captive.

Others were National Democratic Party, National Interest Party, Communist Party of Nigeria, Rebuild Nigeria Party and Movement of the People among others.