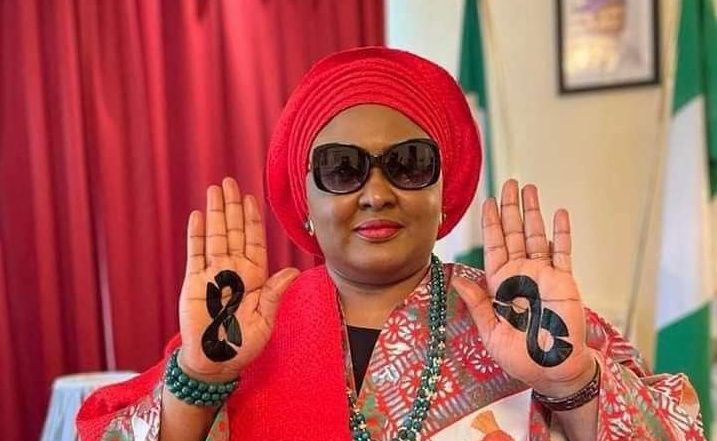 The first lady, Aisha Buhari, has urged all members of the ruling All Progressives Congress (APC) to close ranks and ensure victory for the Tinubu/Shettima Presidential bid in the forthcoming 2023 election.

Mrs Buhari was speaking on Thursday when she inaugurated the APC Women and Youths Wing of the Tinubu/Shettima Presidential Campaign team in Ilorin, Kwara State.

She explained that the party ran a unique campaign during the 2015 and 2019 electioneering campaigns and it is determined to do same and ensure victory in forthcoming elections.

”The women and youth presidential campaign committee has become a movement by proving to be the game changer, leading a door to door campaign which led to a victory for APC at the 2015 presidential election.

”The victory is largely attributed to the tenacious efforts of young men and women of our party who drove out in an unprecedented numbers to vote for our party in 2015 and 2019 Presidential elections and we hope history will repeat itself in the 2023 elections.

She urged APC women and youths to sustain the energy and spirit used in the previous electioneering campaigns by ensuring a door-to-door campaign for the success of the party at the poll.

While handing over the flag of the party to Oluremi Tinubu for the commencement of nationwide campaign, the first lady urged her to close ranks with all members and pursue a vigorous campaign to ensure victory.

”As I hand over this victory flag, I want you to move from zone to zone, state by state and seek for votes for the APC in order to deliver our candidate Asiwaju Bola Ahmed Tinubu,” she said.

She urged Nigerian women and youths to support APC in its determination to complete the ongoing project it started for the benefit of all Nigerians.

”APC is making progress in the field of women empowerment and with APC the future of women and youth of Nigeria is assured.

”The affirmative action is a work in progress since the 1990s and we are happy because the foundation on which the incoming APC administration will crown our efforts has now been laid,” she said.

On her part, the wife of the APC Presidential Candidate,  Oluremi Tinubu, said the inauguration of the women and youths campaign team further reassured her of a nation that is unified, productive and peaceful.

Tinubu assured the gathering of their continued support to the less privileged Nigerians, especially in the areas of girl-child education and youths empowerment if Tinubu/Shettima are elected in the coming election.

The event was attended by the wives of the Governors of the APC-controlled states.