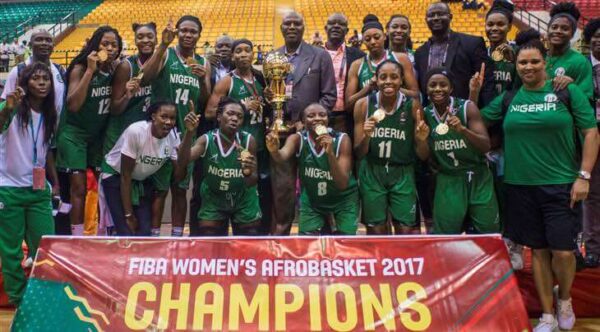 The senior national women’s basketball team, D’Tigress on Thursday thrashed DR Congo 79-46 in the quarter finals of the 2019 Afrobasket Women’s Championship in Dakar, Senegal.
The News Agency of Nigeria reports that with the victory, the D’Tigress, who are the defending champions of the competition have now qualified for the semi-finals.
The team was all-conquering in the game played at the Dakar Arena by winning all the quarters, 22-9, 38-23 and finishing the game 79-46 against the hapless Congo women.
“We worked hard today and we just need to keep improving every day. We are in the semi-finals and this is an opportunity for us to try and defend our title,’’ D Tigress Captain, Adaora Elonu, said after the game.
Nigeria had earlier demolished Cameroon 106-39 and crushed Tunisia 75-26 in the group stage.
NAN reports that in the other quarter-final game, Mozambique defeated Egypt 80-66, while Mali take on Cote d’Ivoire and host Senegal versus Angola complete the fixtures.
The championship, which began on Saturday, expected to end on August 18, is an Olympic qualifier.
It is the first step for qualification from FIBA Africa for the women’s basketball tournament at the 2020 Summer Olympics in Tokyo, Japan.