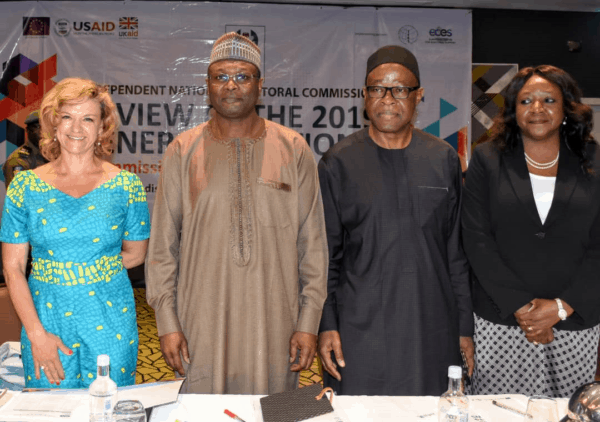 Prof. Mahmood Yakubu, the Chairman, Independent National Electoral Commission on Monday commended the media on the level of coverage it gave the 2019 general elections and called for implementable recommendations ahead of 2023.
Yakubu spoke at the Post-2019 General Elections Review Meeting with the Media in Lagos, where he lauded journalists for their coverage of the Continuous Voter’s Registration exercise, party primaries, elections and others.
He said: “Through the goodwill we enjoy from the media, the 2019 general elections was the most extensively covered story this year; though we are just in the middle of the year.
“There is no story that was extensively covered in 2019 as the 2019 elections. You were generous in your coverage.
“I can’t remember any activity in Nigeria covered for four weeks online, TV, radio, newspapers, social media, and the commission didn’t pay for it.
“In particular, the 3:00pm daily media briefing that was covered by all the major networks live.
“I can’t remember any organisation conducting live press conferences for a whole week covered by all the major networks, and you covered these activities free for the commission. I want to appreciate the media for that.”
Yakubu said that the meeting was to provide avenue for media practitioners to raise issues that would improve electoral process in the country, as the commission would work with other institutions and stakeholders to do so.
He said: “The entire commission is here to listen to you, as you share your experiences on how we can make our electoral processes better. The conduct of elections involves stakeholders far beyond INEC.
“We are right now reviewing some of the reports from the accredited observers, the national and international accredited observers. Many of the recommendations cannot be implemented by INEC alone by administrative actions.
“They require the collaboration of others, and in most cases, amendment to the electoral framework, which is actually beyond INEC itself, but has to do with the National Assembly.”
According to him, out of the 30 recommendations of the European Union to INEC, only nine can be implemented by the commission through administrative action, while only eight can be implemented of the 24 recommendations by the Commonwealth.
Yabuku said that the commission looked forward to the observations, suggestions and recommendations by the media, which would form part of the electoral process.
He said that some of the recommendations that could be implemented by administrative action would be implemented in the forthcoming Bayelsa and Kogi governorship elections on November 16.
The INEC chairman said that he, all his national commissioners and the secretaries would interface with various stakeholders in one-week-long events, which would also involve all returning officers, as part of the review of the 2019 general elections.
He said that since the conclusion of the 2019 elections, the event was the seventh review meeting with the stakeholders, to have better elections in future.
According to him, INEC has held in-house meeting with officials, electoral officers from 774 local governments, political parties, and civil society organisations, among others.
In his welcome address, Sam Olumekun, the INEC Resident Electoral Commissioner, Lagos State, commended media professionals for their support and synergy before, during and after the elections.
Olumekum said: “We want to hear from you what we have done right and how to improve on them; what we have done wrong and how to improve on them. This interaction will help shape the future.
“INEC is being treated as a “solve all” organisation. It is, therefore, not uncommon to blame the commission for every inconceivable fault during elections.”
In her goodwill message, Funke Egbemode, the President, Nigerian Guild of Editors, who urged the participants to tell INEC what it did wrong, said that the media had no choice but to support INEC, because the profession only thrives in a democracy.
Egbemode, represented by Mustapha Isah, the Vice Chairman (West) NGE, frowned at the do-or-die attitude and act of desperation of politicians, describing it as ‘a disease’ that could not be tamed by law but attitudinal change.
She said: “On our part, we will support INEC to do its business because we have a stake in the survival of this country.”
Dr Qasim Akinreti, the Chairman, Nigeria Union of Journalists, Lagos State Council, said the meeting was not a press briefing but to hit INEC critically to make the nation’s electoral process and democracy better.
Akinreti challenged the commission to look into the processes of candidates’ nomination for elections, logistics, media accreditation and punishment for electoral offenders.
In her goodwill message, Monica Frassoni, President, European Centre for Electoral Support, commended the media, but highlighted the danger of fake news and its impact on democracy.
NAN reports that the event was attended by line editors and producers of various media organisations, the NUJ, INEC National Commissioners and directors, among others.

10-year-old rescued from abusive caregiver who hit her face on the...