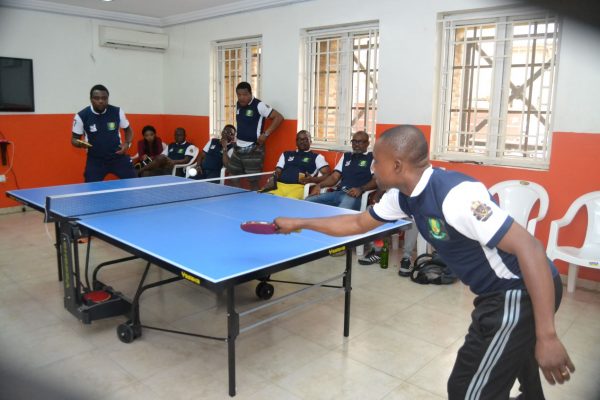 The 8th edition of the El-Marino ‘Alukimba’ Table Tennis Tournament will hold on April 22, 2019 at the Alfred Gardens Recreation Centre, Oregun, Ikeja, Lagos.
The tournament, which is being sponsored by Otunba Toyin Alukimba Odunowo, promises to be very exciting this year as more members of the Club have been preparing for the tournament with determination to dethrone Uchechi Okere, aka Teacher, who has won the tournament four times.
Players that may likely end the reign of Teacher include Paul Asemota, Toks Modupe, Moses Ideho, Anthony Akamagwuna, Remi Koledoye and Chris Anazia.
Other players to watch out for include Charles Igbinidu, Stephen Ighomuaye, Hilton Enearu, Alex Agbotia, Otunba Seyi Adefarati, Edoka Dox Onyeke, Igho Obajuwana and Babatunde Adebayo.
These players may likely spring surprises if underrated.
Speaking on the preparation for this year’s edition of the tournament, the Team Manager of El-Marino Sports Club, Anthony Akamagwuna, revealed that everything has been done to ensure that the event is more exciting than previous editions.
Akamagwuna further disclosed that members will have more time for fun after the tournament.
He therefore implored all members and invited guests to be punctual as registration of players will commence by 9am and contest for supremacy will start by 9:30am.
On his part, the sponsor of the tournament, Otunba Toyin Alukimba Odunowo, thanked the Almighty God for sustaining his life and the tournament.
He appealed to participants to demonstrate the true spirit of sportsmanship as they have always done.
It would be recalled that Uchechi Okere defeated Paul Asemota 4-11, 11-6, 11-9 to retain the trophy at the 2018 tournament, which also took place at the Alfred Gardens Recreation Centre.
El-Marino is a Lagos-based sports club that promotes physical development of members and healthy living through participation in sporting activities.
It is a non-religious, multicultural and non-governmental club that also develops and contributes to charitable causes in various parts of the country.
The Club also develops and contributes to charitable causes in various parts of the country.
Economic empowerment of members is also key for the club.