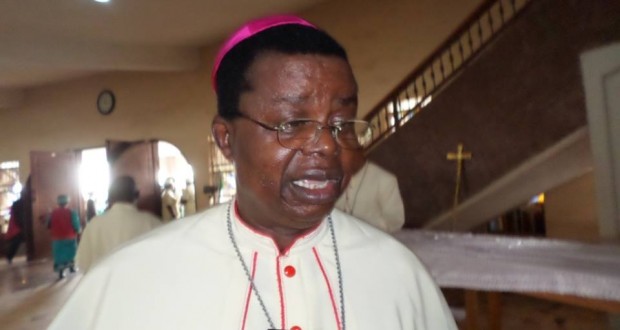 The Independent National Electoral Commission has been advised to make the electorate aware that there could be delay in the release of results of the 2019 general elections.
Bishop Paulinus Ezeokafor, Catholic Bishop of Awka Diocese,  gave the advice when officials of INEC, Anambra, paid him an advocacy visit on Wednesday in Awka.
Dr Nkwachukwu Orji, INEC Resident Electoral Commissioner, Anambra, had noted that with the huge number of registered voters in the state, it would not be easy to collate and release results like in 2015.
Ezeokafor said letting Nigerians understand that due to the number of political parties contesting the elections, collation and announcement time would take longer to accomplish.
He said: “But for this your visit, I wouldn’t have known that it would be a herculean task collating and announcing the 2019 election results.
“I will use our communication link to reach Catholics spread in the seven out of the 21 Local Government areas that constitute the Awka Diocese.”
Ezeokafor described the impending elections as a serious exercise, which decides the life of a nation, urging INEC to ensure it conducts free, fair and credible polls.
He said: “As a church, we continue to pray for Nigeria, and NEC for peaceful elections because I believe in former President Goodluck Jonathans comments that his election was not worth the blood of anyone.”
NAN reports that INEC team also paid advocacy visit to Bishop Alex Ibezim of Anglican Diocese of Awka.
Ibezim commended INEC for the visit, adding that if such advocacy was carried out in the past, it would have reduced incidences of electoral violence.
He noted that most Nigerians were politically uninformed, which according to him had caused thuggery and violence.
He said before now all that people at the grassroots believe was that the results for the 2019 general elections have been written.
He said: “But with the explanation, we will help INEC spread the message to make sure the nation remained at peace before, during and after the elections.”
Dr Nkwachukwu Orji, INEC Resident Electoral Commissioner, Anambra, said the aim of the advocacy visit was to make the Bishops enlighten their congregantion on dos and don’ts of the upcoming elections.
He said that Nigeria had 91 registered political parties, out of which 73 were fielding candidates for the presidential election.
The INEC official, who spoke separately to both clerics said that 84 million Nigerians were currently in the register of the commission as eligible voters.
He noted that with the huge number it would not be easy to collate and release results like in 2015.
Orji said that more than 25, 000 ad-hoc staff would be engaged to conduct the elections in Anambra excluding the security personnel.
He said: “We have engaged more than 25,000 persons as ad-hoc staff for the elections in Anambra, in addition to security personnel for the exercise.
“They have been trained and made to understand that anyone found wanting will face the `music’ as an individual whether you are security personnel or ad-hoc staff.
“The era when the commission carried all the bad name during elections is over.”